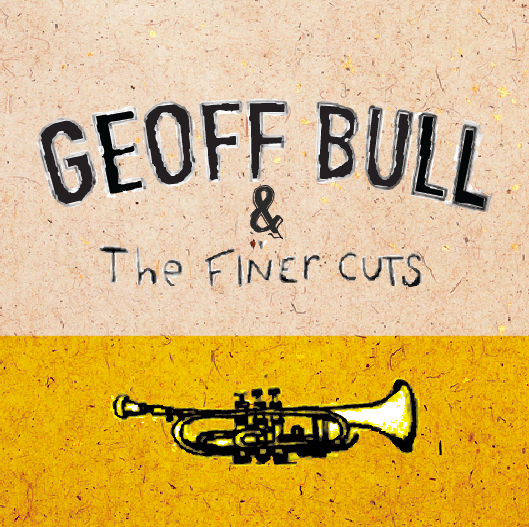 With all my talk about Australian jazz history (I have to warn you: I’ve just been to the doctor, and am now on some SRS DRUGZ to combat another installment of the fucking sinus infection, so this post is probably less coherent than even the earlier ones. even.)…

So, as I was saying. With all that talk about Australian Jazz History, I forgot to tell you about Geoff Bull and the Finer Cuts.

When I first heard the CD I was all “omg, this is the worst thing I have ever heard.” I was tempted to delete it. I know, harsh, huh? But I had just been wallowing in my new Coleman Hawkins set (ie in sixty million 1930s big band recordings of the highest order), had just bought the latest Gordon Webster album and was really feeling quite over the ‘little street jazz band combo’ thing. I wanted a huge, sophisticated rhythm section. I was over rowdy solos.

I know. I’m a dickhead. It’s like I forgot what jazz was all about for a minute there. Maybe it was because I was getting sick. Who knows what was going on inside my head.

But I gave the CD/EP a rest, and then I came back to it. After I saw the band at the Corridor. That gig really impressed me. I wrote about it here. I really like to see a combo working well. And they did. So I gave the CD another go.

Now I’m all “omg this is good. I will even DJ it.” The song ‘Glory Glory’ is gold. It’s really quite lovely. I Approve. I really like Geoff’s vocals and trumpeting. I do like the piano. I’m still not 100% sold on some of the vocals, but then it took me a while to come around to Jesse Selengut’s vocals, and that was obviously crazy talk. But then I’m quite conservative. I know a lot of people do like the vocals, and you might too.

In summary, then, you should: