The big news here in DJ supernerd land, is that my new Mosaic Coleman Hawkins collection has arrived. Yep, it’s great. There’s some Fletcher Henderson stuff in there that’ll blow your brains with the quality: you really feel as though your guts want to asplode with excitement. And there are some Metronome All-Star sessions from the 40s which really rock my boat. Especially the Frank Sinatra stuff – I love it when he plays with a real jazz band, as they stop him bullshitting on with his show pony act.

So what’s the big deal with these Mosaic sets? DJ nerds tend to get a bit squee about these sets. I admit, this is, for the most part, a fanboy thing, and I use the ‘boy’ quite deliberately – jazz fandom is totally boy dominated. Except for the bits I pwn. 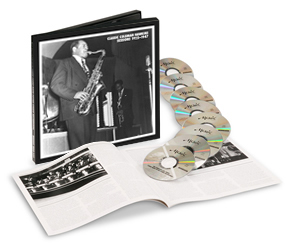 The Mosaic sets are built for fans, for collectors:

I have some Mosaic sets. They are totally GREAT. They are almost all of far better quality than any other recordings I own (though I’m still not convinced about the Duke Ellington small group set – I think my RCA/Bluebird ‘Duke’s Men’ CD sets are pretty good). There’s very little doubling up between sets (so even the Chu Berry, Lionel Hampton and Coleman Hawkins sets don’t give me much double up). Sets like the Count Basie Verve set are an absolute delight: brilliant quality, some fabulous 1950s stuff which really shines in these remastered recordings.
If you do want the definitive collection of works by an artist you’re going to eventually collect anyway (the Ellington set, the Basie/Lester young set, the Lionel Hampton set, maybe the Goodman set spring to mind), then the Mosaic box sets are perfect.
And there are plenty of sets which are full of great stuff for DJing: the Django Reinhardt set is brilliant (but, honestly, of limited use for DJing), the Lunceford set is no doubt a winner, the Louis Armstrong set looks fab, but could get a bit samey, there’s a great Okeh and Brunswick Bix Beiderbecke, Frank Trumbauer and Jack Teagarden set (1924-1936). There are plenty of brilliants Mosaic sets (many of which are out of print but can be found on ebay or amazon), but that’s a lot music. You’d want to be very sure you could use it.

But you know what? Nobody really needs all those bloody outtakes. Even if you’re going complete on someone like Stuff Smith, do you really want eighteen discs of Nat King Cole crooning his way through low-impact mellow? There’s no way you’re ever going to DJ even all the ‘danceable’ stuff (however you define that). And buying all the ‘cool’ Mosaic sets will not make you a better DJ. To be honest, even ripping all the music into your laptop for DJing is a bit of a waste of time – you’re only going to need to re-rip them all again in ten years time when technology moves on. And then you’re going to need to re-enter all that bpm, personnel and danceability information again. AGAIN. Mosaic sets are great, but their greatest value is as an item to display and to remember you own. They are fansquee.

I wouldn’t recommend a Mosaic set to a new DJ. I certainly wouldn’t recommend them to a new dancer. They range from $120 to $180 a set, and while you are getting between five and eight CDs of the best-quality sound and all those liner notes, that’s still a big chunk of cash. And even just five CDs by one band can wear on a listener’s ear. It’s almost certainly too much for a new dancer or DJ who really isn’t used to listening for a particular musician’s style or discerning sound quality. I’d probably even argue that an experienced DJ’s ear is so trashed by bullshit sound systems and overly mic-ed big bands they can’t discern those differences either.

But still.
I’m the type of person who adores outtakes. I love catching a moment in the studio with musicians I idolise. Just a minute of swearing and laughing. A drunken exclamation of frustration. The patience of a sound engineer requesting another take. I love all that. I love it. I love listening for the differences between takes, imagined or real. I love these massive sets. I love the way they arrive in the post, in that massive, robust cardboard box. I love peeling open the plastic. I even like swearing at the infamously crap Mosaic CD cases. Even when I crack a CD. Which I have. I especially the discographical detail. I love going through my collection and weeding out superseded duplicates. Can’t say I spend that much time with the liner notes, though. Once I’ve read (part of) them, I’m off. Mostly because there are few things I hate more than jazz journalism. It’s one of the last bastions of wanking boys club bullshit.

But I wouldn’t recommend these sets to every DJ or dancer.

I would, however, recommend the Mosaic singles or small packs.

I’d have bought the Sidney Bechet Select 3-CD set if I didn’t already have 90% of it on other quality recordings. Bechet is one of those artists who’s not only good sauce for lindy hop, he’s also often in bands with other quality folk, so you get even more bang for your buck.

The Mosaic Select: Boogie Woogie & Blues Piano a little while ago, and it’s fabulous. Again, I’m not entirely sure it’s for everyone, as boogie piano can get pretty samey if you’re not a big fan, but this set is particularly good. I am a bit disappointed by the lack of women pianists – there are fuckloads of high profile women boogie pianists, but this set only manages to squeeze in one Mary Lou Williams track. SHAME. But there are some great Kansas shouters in there (Big Joe Turner!) and some fabulously swinging tracks for dancing. Or listening. 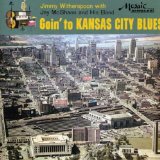 The Witherspoon/McShann ‘Goin to Kansas City’ Mosaic single is a must-have. I don’t think Mosaic sell it themselves any more, but you can buy it on amazon (bit exy if you’re not careful). You can buy it as a download, but I wouldn’t, as most of the commercial downloads are fucked up audio files. You really want that gorgeous Mosaic quality on CD. But that McShann/Witherspoon CD is solid gold. I DJ from it all the time, and I LOVE listening to it.

I also have my eye on this Bud Freeman/Jack Teagarden Mosaic single, but I’m not sure how great it’ll be for DJing.

So, to sumarise, the Mosaic sets are truly fabulous. They do tend towards the ‘top ten’ of jazz, so you don’t hear a lot of more unusual artists. But that’s ok, because most lindy hop DJing is about DJing the top ten of swing. If you’re a collector, or a DJ with a few years under your belt who just wants top shelf quality for DJing, then get into that action. If you’re new to DJing, go for the singles or 3-CD sets, just beware of the later stuff which is rubbish for DJing.
For my money, the best Mosaic sets are the ones following a particular musician through various bands, because you get a taste of a heap of bands:

The Coleman Hawkins set is also good, ranging from 1922 to 1947, with stuff by bands led by Fletcher Henderson, Lionel Hampton, smaller groups like the Chocolate Dandies and Mound City Blue Blowers, and later all-star recordings like the Metronome groups, and Hawkins’ and Cozy Cole’s own groups.

While there’s nothing as good as a well-mastered set of music by fabulous musicians, if you’re a newer DJ or dancer, you might be better off with the 2 or 3 CD sets by the big name labels for an introduction to key artists. And I do think the Ken Burns Jazz CDs are a brilliant place to begin collecting.