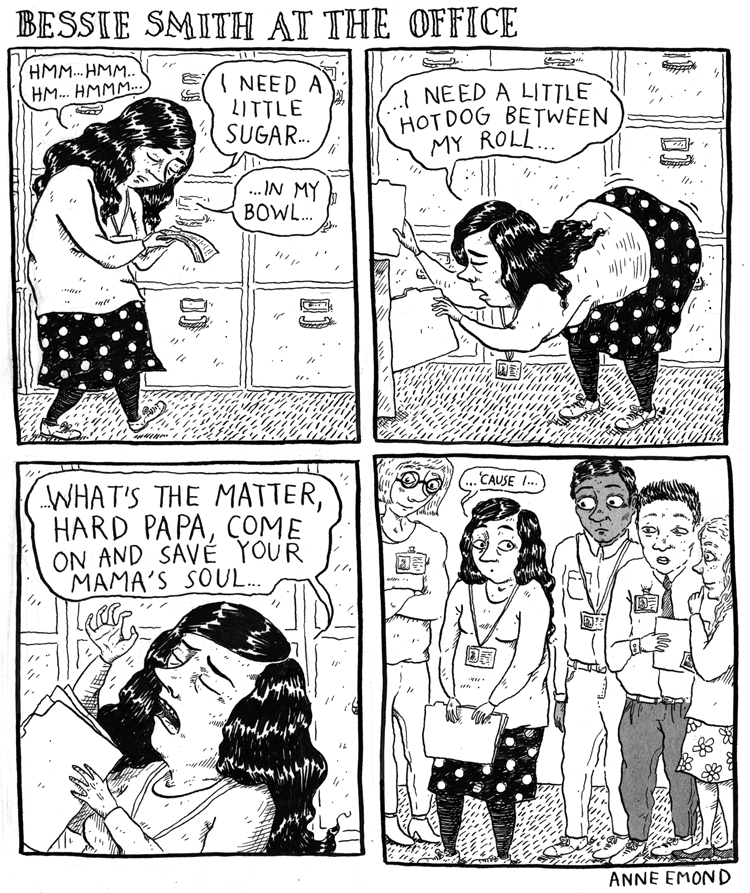 (if you like this, you can buy a nice print: from Ann’s shop)

Last night I dropped in at the Geoff Bull and the Finer Cuts gig at the Corridor in Newtown. The corridor is a skinny, two-story joint with a roof top garden and heaps of hipsters. Because it is a small space, you’re wedged up against the band. Literally – I was hip-to-butt with the saxophonist a few times, and Geoff had to ask some Rowdy Yoofs to be a bit careful when they danced. All three of them. There’s only one mic – for the vocals. Otherwise, everything’s as it’s meant to be in jazz: unamplified, rowdy, right there up in your face.

Geoff Bull is a gun. He holds those young people musicians together, the way a good band leader should. Without him, they flounder a bit. Every band needs a good leader. Watching, I was suddenly struck by the way jazz music is like jazz dance. Well, duh, but it really struck me last night. We’ve been focussing our teaching on rhythms and sharing rhythms lately, and I suddenly realised that a good jazz band shares a little rhythm or a bit of melody in a gig the way we share a nice rhythm on the dance floor. Geoff played a little clump of notes once, twice, his eyebrows raised in the direction of the (ninja) trombone dood. By the third time, trombone guy had it, and joined in, at first the same notes, then mucking with the harmony.

I was suddenly reminded of the way I might share a rhythm or a move with a friend on the social dance floor, either my partner in lindy hop, or my solo dancing buddy(s). Once, twice, and then you both have it.
Watching Geoff, I felt my muscles start to jump as the signal got through. Once, twice, and then I had to hold myself to my seat to stop from leaping up to join in.

Just like in class, when we’re teaching the beginners rhythms: we step it or scat it clap it, then they join in when they’re ready. Then we step it out. Then we’re all dancing together, all joining in on that one repeating rhythm. And then you each start to play with it, make it slightly different. And suddenly you realise that every dancer’s body makes the rhythm unique. If you’re tall, your steps are wider, the time between each step is longer, If you’re little and fierce, you can add a little accenting stampy-stamp. Just like the musicians in the band: lower notes for a trombone, shouting squawks from a trumpet, bouncing thumps from a bass.

Watching the band, I wondered how they’d feel about me jumping up and joining in. Would they like it? I know I would. Later on, Geoff encouraged clapping, and clapping at just the right time. I think he’d like it too.

the band sang that song ‘Closer to the bone’, where the lyrics go like this:

Sweeter is the meat
Last slice of Virginia ham
Is the best that you can eat
Now don’cha talk about my baby
She’s slender but she’s sweet,
Closest to the bone

Ordinarily, I like this sort of song. But this one bothers me. Something about a man singing about consuming, objectifying a woman’s flesh, his insistence that her personality can be overlooked because she’s physically all that… nah. I don’t like that talk. In a context where women’s bodies are commodified by our culture, this song makes me feel a bit not ok. If it were a woman singing about a man… well. Maybe that’d be different.

Looking around the room (because for a moment, I didn’t want to look at or engage with the band), I realised there were at least a handful of thin, beautiful young women near us. I wondered what they thought about this objectification of their bodies. And then I realised, they were already letting me know what they thought, in the best way possible. They were talking to each other loudly and enthusiastically, ignoring the band. Your sexist song? It is beneath our notice. Sisterhood is far more powerful, yo.

I like this at a jazz gig. If a band can’t keep the attention of its audience, then it doesn’t deserve that attention. If what you’re saying and doing isn’t reaching out grabbing at the attention of the people in the room, your work isn’t working. Particularly if the room is about the size of a large train carriage. Almost the size.

It was an interesting moment. The song was fun, it was good, it involved a fair bit of shouting from the band. But the content wasn’t cutting it. It made me feel uncomfortable, and it wasn’t working for those fashionable, thin young women. Your shock-content song: it fails to register.

And this brings me (finally) to Ann Emond’s comic up there. Bessie Smith sang songs that objectified men’s (and women’s) bodies, with the sort of fleshly enthusiasm that blues is very good at. But she was a woman, a powerful black woman, singing about men. She wasn’t a bunch of white middle class jazz musician blokes in an inner western Sydney bar. She was in a tent or a bar, shouting at a crowd who respected her (or were about to respect her), and she was a black woman in a time and place when black women were only very recently objects to be bought and sold (by white men). It meant – it means – something very different. And I write this as someone who understand the blues music idiom. I understand that there are layers of meaning to a song, and that this particular song invites reading on the slant, as well as on the face of it. But I’m not convinced that there enough layers, or enough complexity in the delivery of that song last night.

I think that context is what makes a blues song. It’s what makes the lyrics work. And while I was enjoying that Finer Cuts gig – I did enjoy that gig, far more than the last time I’ve seen them – that particular song didn’t quite cut it. 1950s Louis Prima isn’t quite the same as 1920s Bessie Smith. Or even 1930s Louis Prima. And I’ve seen that song not quite cut it before when Puggsly Buzzard’s played it.

Sure, I understand that they’re trying to be bold with dirty, transgressive lyrics. But I don’t think there’s anything much transgressive about a bunch of enfranchised blokes singing about consuming the bodies of women. That’s really just business as usual. The status quo in our culture.
It was particularly telling when you consider the fact that a beautiful, young, slim, black woman had joined the band for a chorus or two of ‘Careless Love’ just a moment before. If I had seen her sing about the sweetness of meat close to the bone, about the skinny, snappy man she liked for his body, if it had been that woman belting out those lyrics, then the band really would have been doing something transgressive. It really would have been provocative.

2 responses to “Blues in place”