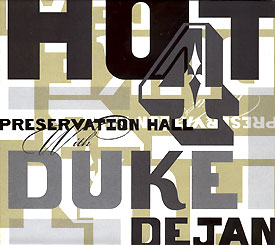 This is my favourite Preservation Hall Jazz Band album. It’s called Preservation Hall Hot 4
“with Duke DeJan” and I like it because it’s a smaller group, and while they’re definitely trucking along, it’s a calmer, quieter album. Their version of ‘Dinah’ is my most favourite, probably because I used to run to it every morning, back in the olden days, when my knees could hack both lindy hop and running. Ah running, I miss you so :(:::

I should write a post about Pres Hall at some stage, but for now, the basics are: this is a band that’s been around for squillions of years, and is really the ‘house band’ for the Preservation Hall in New Orleans. The personnel have changed over the years, but the core ethos – play good music – has not. They have a jillion albums, and if you like jazz, you really should buy them all. I especially like the album with Del McCoury’s band, but you mightn’t – there’s a lot of stringy old timey action there. I also like the Preservation: An album benefitting Preservation Hall and the Preservation Hall Music Outreach Program album, but the Hurricane Sessions one is good too.

Dancers tend to favour their version of ‘Shake That Thing’ (from the album Shake that thing), ‘Last Chance to Dance’ and ‘Sugar Blues’ (from the Hurricane Sessions album). But I prefer this quieter, gentler album. It’s really quite a different type of jazz – less of that raucous collective improvisation. More of that quieter, listening-to-each-other stuff.

This Jazzwax post “Coleman Hawkins: 1922-1947” is an interesting complement to the Mosaic Coleman Hawkins set and to the idea of Anthologies or collections of individual works as a creative product in its own right (as I began discussing in my post “More thoughts, also illness-addled and pseudoephedrine-fuelled.“).

I’m also interested in the new film Ballads, Blues and Bluegrass directed by Alan Lomax and featuring lots of lovely archival footage from the Folkways project 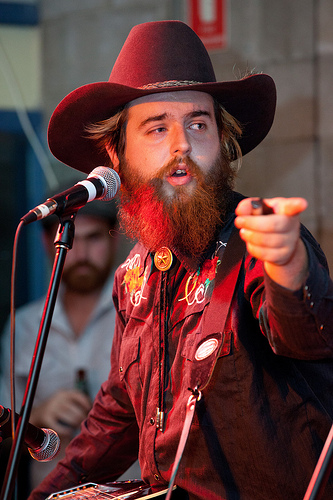 If you like ol timey music, you should check out Bellyache Ben and the Steamgrass Boys. They do a version of ‘Oh Death’ that I’d DJ at a blues dancing event fo SHO.

It’s much easier to be pleased when you’re not a seething mass of anxiety. So today, I am far more easily pleased than I was last week. I’m not sure whether this moment of calm will last, but for now, I’m just going to enjoy it.

Earlier today I was pleased by Thomas McCarthy’s new film Win Win. It’s no Station Agent, but it pleased me.
Then I was pleased by a nice panini in a cafe full of middle aged Italian men enjoying a widescreen television presentation of the tennis.
Right now I’m really enjoying Abigail Washburn singing Everybody Does It Now.

Tomorrow it might be very difficult to find something that pleases me. But right now it’s a pleasure to just sit here on the couch and listen.