Reflections on Anthologized Recordings: The Alan Lomax Collection on Rounder Records and the John A. and Ruby Lomax 1939 Southern States Recording Trip on the Library of Congress American Memory Website (vol 4, issue 2, 2002 of Echo) by Anthony Seeger

I’ve been doing a bit of writing and thinking about ethnographic music research (mostly because I’ve never quite resolved my own qualms about ethnographic research practice from my own work), and have come across this interesting article about the Lomax anthologised collections. I was especially interested in the comments about how anthologies might work in a digital environment.

I’m a big fan of the work by editors, librarians, DJs and other folk who develop curated collections of works. I like exploring the connections someone else has made between individual items. I don’t think ‘the album is dead’, but I do think we’re living in a time when strategic organisation and curatorship of art (especially music) can be quite exiting.

I don’t buy the argument that DJing isn’t as creatively worthy as recording or playing music yourself. I just think that DJing – as with other forms of thoughtful curatorship – is a different type of creativity. 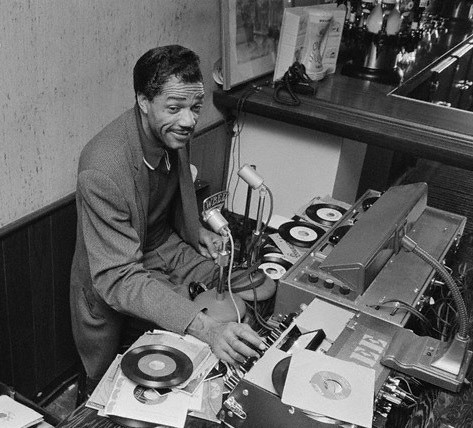 This is probably why I’m fascinated by that picture of Slim Gaillard DJing. He was such an unusual person, was as likely to tell you a completely made up story about his life as a ‘true’ one, I reckon his DJing would have been great. And I bet he did things like talk over tracks, interrupt songs and other DJing badnaughtywrongs.