In the earliest parts of my researching into jazz history, I tried to set up a sort of ‘time line’ or map* of musicians and cities and bands. Who played with which band in what city at what time? Then where did they go? This approach was partly based on the idea that particularly influential musicians (like Armstrong) would spread influence, from New Orleans to New York and beyond.
But drawing these time lines out on pieces of paper, I found it wasn’t possible to draw a nice, clear line from New Orleans to New York, passing through particular bands. Musicians left New Orleans, went to New York, then back to New Orleans, then off to France, then back again to New York. The discographies revealed the fact that a band recorded in different cities during the year – they were in constant motion, all over America. Furthermore, musicians didn’t stick with one band, they moved between bands, they regularly used pseudonyms and even the term ‘band’ is problematic. The Mills Blue Rhythm Band, with its dozens and dozens of names, was in fact a shifting, changing association of musicians, and did not even have a fixed ‘core’ set of players. Perhaps this is why the MBRB is so important: many people played with them, and they were a band(s) which moved and changed shape, a loose network of musicians who really only existed as ‘a band’ when they were caught, in one moment, on a recording. Or perhaps on a stage (though that’s far more problematic). I wonder if that’s why it’s so hard to find a photo of them? Perhaps the ‘Mills Blue Rhythm Band’, as a discrete entity didn’t really exist? This, as Eschen continues, despite the fact that Armstrong was actually an active campaigner for civil rights in America, and overseas.

The trad jazz movement – or ‘moldy figs’ pushing for the preservation of an ‘authentic’ jazz from New Orleans – effectively pushes Armstrong to continue as Uncle Tom – unthreatening black man clowning for white audiences. A narrative history of jazz which emphasises a beginning in New Orleans and a consistent, clearly defined lineage of musicians and styles also, more subtly, relies on an idea of the black musician as powerless or unthreatening. DeVeaux makes the point that positioning jazz (and jazz musicians) as artistic loners who do not ‘sell out’ with commercial success: Billie Holiday becomes a particularly attractive representation for this idea of the ‘jazz musician’: poor, black, addled by drugs and alcohol, a history of prostitution, yet nonetheless, a creative genius pouring out, untainted in recording sessions (and I’m reminded of the ‘one take’ stories) and tragically cut short.
All of this is quite disturbing for someone who really, really likes jazz from the 20s, 30s and 40s. Am I buying into this disturbing jazz mythology? It’s even more disturbing for someone who found similar themes in contemporary swing dancers’ development of ‘narratives’ and geneologies of jazz dance history. As DeVeaux writes (about jazz, not dance), though, this is 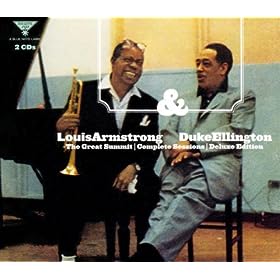 I don’t think it’s that simple. Gabbard discusses Armstrong’s work with Duke Ellington, including the filming of the 1961 film Paris Blues (in which Armstrong starred, and for which Ellington contributed the score) and the recording of the ‘Summit’ sessions:

…at those moments in the film when he seems most eager to please with his vocal performances, his mugging is sufficiently exaggerated to suggest and ulterior motive. Lester Bowie has suggested that Armstrong is essentially “slipping a little poison into the coffee of those who think they are watching a harmless darkie”.Throughout his career in films, Armstrong continued to subvert received notions of African American identity, signifying on the camera while creating a style of trumpet performance that was virile, erotic, dramatic, and playful. No other black entertainer of Armstrong’s generation “with the possible exception of Ellington” brought so much intensity and charisma to his performances. But because Armstrong did not change his masculine presentation after the 1920s, many of his gestures became obsolete and lost their revolutionary edge. For many black and white Americans in the 1950s and 1960s, he was an embarrassment. In the early days of the twenty-first century, when Armstrong is regularly cast as a heroicized figure in the increasingly heroicising narrative of jazz history, we should remember that he was regularly asked to play the buffoon when he appeared on films and television (Gabbard 298)

You can see a clip from Paris Blues here.
Armstrong’s performance gains meaning from its context, from the point of view of the observer, from his own actions as a ‘real’ person (Armstrong was in fact openly, assertively critical of Jim Crowism and quite politically active) and from its position within a broader ‘body’ of Armstrong’s work as a public performer. Pinning it down is difficult – it’s slippery.

Sorry to end this so abruptly: these are really just ideas in process. :D
To sum all that up:

2 responses to “the trouble with linear jazz narratives + more”