Embedding is disabled (boo!), but you can see her dancing in this scene from the 1929 film ‘Hallelujah’.
I’ve only just discovered McKinney – and I think I might be in love. 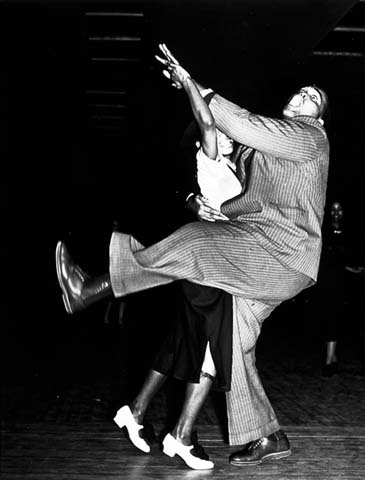 A tiny woman who partnered ‘Tiny’ Bunch in the 1938 film ‘Manhattan Merry-go-round’: watch a snippet here, and read more about Johnson at savoystyle.com.

My attention was caught yesterday by a thread on Yehoodi about a blog post by Sarah Breck titled Why women should wear heels. Sarah took down the original post and replaced it with another, but I’ve just had another look and seen that the post is back up again. My post, here, is about the way this issue fits into a bigger story about how dancers control their online, public image.

I think Sarah has the right to retract her statement. Though good luck to her – retracting comments from the intertubes is pretty much impossible. I might include the content from both of Sarah’s posts (which I’ve just copied and pasted at 1.55pm Sat 26th March 2011) in another post, but I’ll think about it carefully before I do. If I do reproduce her posts, I’ll engage with her arguments carefully, as I think she’s making a knowledgeable contribution to a discussion about women and dance.

I was disappointed to see Sarah take down the original post, as I think she has a perfect right to express her opinion. I also think that opinion is worth exploring, as Sarah is an excellent dancer, and a big name, influential teacher. She teaches other women how to dance, and she provides an influential contribution to dance discourse. I’d have preferred she didn’t take down her post, as it disturbs the narrative ‘flow’ of this wider discussion (there are a bundle of other blog posts from other people as well as the Yehoodi thread already), but then that’s really my problem, not hers. The absence of her post is itself a statement: she wanted to disassociate herself from that public statement, perhaps, while she might still stand by her original point.

I also understand why she might like to take the post down. Manu’s original link to her post seemed a little trolly (and was the second link he’s recently made to an inflamatory statement of traditional gender roles, not counting the segment on the Yehoodi talk show), and and this sent people to Sarah’s post in a fairly antagonistic frame of mind. Sarah didn’t really get the better end of this (desperate metaphoric) stick, and there were some firey comments and discussions.

As I read it, the debate on Yehoodi and in responding blog posts (taint what you do, ann mony, short girl blog) seemed to be polarised between conservative blokes valorising traditional, patriarchal notions of femininity and leftish women firing up and attacking Sarah’s comments. I’m not sure Sarah has that much experience with online debates (going by the style of her writing and her responses to comments), and suddenly being at the centre of what was becoming a shit storm would have upset me. And I’m used to shit storms on dance discussion boards. So, frankly, I think her decision to take down the post was probably a good one. It’s her blog, she’s the boss, and frankly, she has a right to say ‘fuck that shit’ and opt out.

I can’t help but think of the (currently raging) debate surrounding Dilbert author Scott Adams’ scary, misogynist blog post which was brought to my attention by Kate Beaton (of Hark a Vagrant) on twitter. Incidentally, I like the way Beaton’s discussion of being a woman comic author in her tweeting prefaced my reading about the Scott Adams issue: I approached this as a talk about comics authors. You can read his original post here and follow that post to the discussion on Feministe, where things get mighty angry (and Adams chimes in in the comments). Scott Adams wrote the post, sparked a furore, then took down the post. He wrote a post which was doing its best to support and promote scary gender politics and roles.

Sarah’s post, though, while it might also have been promoting conservative gender identities and roles, was not aggressively misogynist, woman-hating bile. It was the measured opinion of one woman posting a comment in a public forum. Yet her writing style was gendered (just as Scott Adams’ was): she is unaggressive, non-confrontational, quick to appease and conciliate. Her male partner chimes in in the comments to defend her. Scott Adams’ style, in contrast, is aggressive, confrontational and fairly unpleasant. Different genders, similarly gendered public talk. Or, perhaps, just as interestingly, Adams’ uses the gendered language of the ‘official’ public sphere: assertive statements, aggressive arguments, attacks and defenses rather than collaboration and cooperation.

In principle, I have some real problems with the content of Sarah’s post. I disagree quite thoroughly. But I am actually very interested in her opinions and discussion: I’ve been thinking about high heeled shoes and women dancers, and I want to read more on this topic. Scott Adams, however, spews vile hate-talk that discourages me from engaging with that discussion.

Sarah is somewhat disadvantaged by her writing skills. The original post has lots of problems, simply as a piece of writing. And the most immediate consequence of this is that it makes it difficult for Sarah to communicate her points clearly and effectively. Another consequence is that Sarah’s status as a knowledgeable dancer and teacher is implicitly destabilised by her writing. While those of us with half a brain realise that being a good dancer and teacher is not at all related to being a good writerer, the weaknesses of her writing imply weaknesses in her logic and argument.

I think there are weaknesses in her argument, but these are unrelated to her writing and – more importantly – thinking skills.

This recent event also reflects a wider issue that’s been in the back of my mind for a while. The last year or two has seen a leap in the number of blogs written and maintained by high profile international dancers. Most of these dancers are what I think of as younger American ‘rock stars’. Rock stars in the sense that they have a modicum of celebrity: well-known, high-profile, fashionable with some dancers, younger, often American. Most of them have had their websites designed and implemented by only a very small number of web nerds, and all have implemented various social media tools.

This is where things get really interesting. I’d argue that these websites have included social media tools – blogs, Faceplant plug ins, twitter feeds, etc – not as part of a carefully planned media strategy, but as a response to a general trend in website design. Yes, social media tools do raise your profile, and do ‘get you out there’. But as with all public relations tools, exposure is a double edged sword. If it were me, I’d vet my contributions to broader discourses very carefully. In fact, I’m not sure I’d even post personal blog posts on my official ‘business’ website – the website promoting my professional persona. I would use my twitter feed fairly prosaicly: updates on my travel and appearances at international and local events, perhaps. I’d also be very careful about my links.

Word of mouth is the most powerful and important promotional tool in international lindy hop. It can make or break a reputation. But a good PR strategy is about knowing how to limit talk as well as encourage it.

This leaves me with some questions.

Firstly, what responsibility should the web designers who produce these multi-media/cross-discourse sites take for their implementation? In any other industry, I’d say “none.” But many of these designers are also members of this community. Should they not take some sort of responsibility for not making sure their clients’ understand how to use their sites, not only practically, but also discursively?

I’ve talked about my own experiences with these sorts of website designers in the post ‘Am I being paranoid or is this dodgy?’, and I think my concerns about aggregated content bare revisiting. Particularly as Manu has also (trolling again?) drawn attention to www.swingdancepro.com, in another Yehoodi thread. Now perhaps Manu is seeing the same sort of trend I have, perhaps he’s just trolling, looking to stir up some debate (and activity) on Yehoodi. I suspect it’s a combination of the two.

Secondly, how should high profile dance teachers use their websites, and how should they manage their online profile? Blogs are useful because they personalise a teacher, and encourage readers (and dancers) to regard the authors as appealing human teachers worth learning from or employing. I’d also imagine a lot of teachers would like to expand on the issues they only touch on in class. They’d like to use blogs as platforms for developing their ideas. I only wonder if they all have the skills and experiences to manage the results of engaging in public talk like this. There are very few blogs written by dancers (high profile or otherwise) which are well-written, carefully thought out actually worth reading regularly. But this is true of the blog world generally: most of us are just spilling out ideas willy-nilly. Grammar, logic and organised though be-damned!
How should these same high profile dance teacher bloggers manage comments and discussion on their sites? If it were me, I’d moderate very carefully, and I’d delete comments that don’t meet my carefully-thought-out-worded-and-publicised comment policy.

I do have more to say about this, particularly in reference to another recent online discussion sparked by Nick’s frank post about working conditions for international teachers, but I’m feeling a bit crook, so I won’t.

All of them, because they are extremely badarse. I’m sorry I don’t have time to check their names just now, I’m just about to go out dancing and DJing myself!

Acrobatic tap from the 1936 film Amuse Yourself.

A lindy hopper I knew nothing about (which isn’t saying much – I don’t know the west coast dancers very well at all), and who was brought to my attention by Bobby White’s post on women dancers which I have also only recently discovered. Dummy that I am.

Cora LaRedd singing and dancing in the number ‘Jig Time’ with Noble Sissle’s Orchestra in the 1933 film That’s the Spirit.

She caught my eye because she has a really strong style, and she has darker skin, which is unusual in these films of black American women tap dancers of the period.