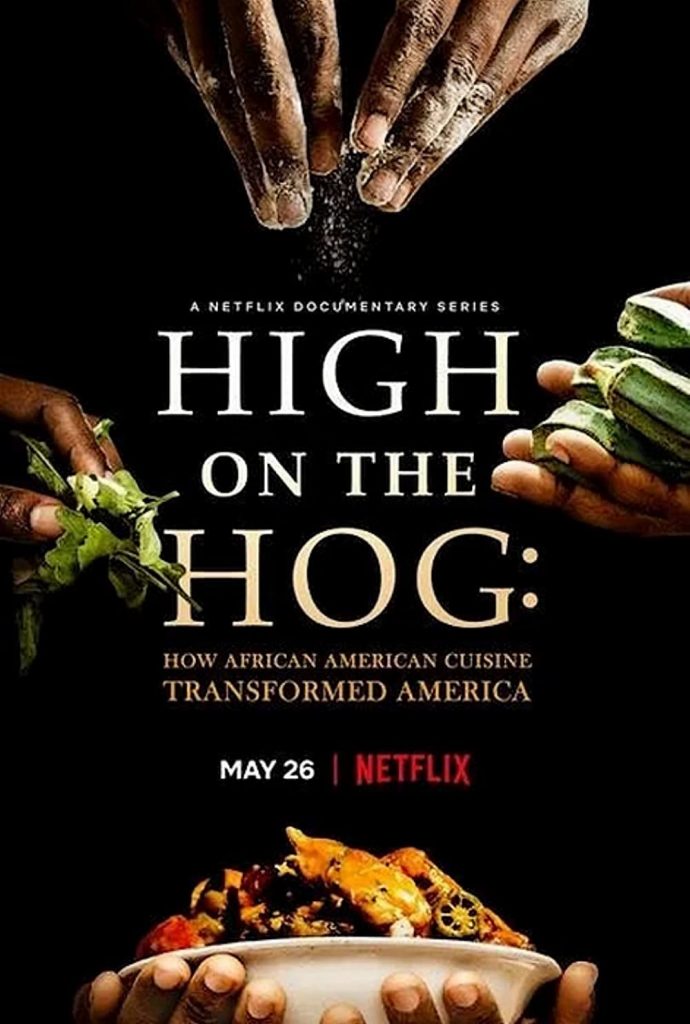 Hosted by the cook and food writer Stephen Satterfield, High On the Hog traces the Black history of American food from Africa to Texas, via the Middle Passage.
Beautifully shot, leaning heavily on Satterfeld’s engaging personality, the program is an accessible engagement with the political history of slavery in America. It is just plain great. To see a screen full of Black cooks and thinkers speaking about cultural production is enough to make a hardened feminist weep with pleasure.

nb If you don’t know much about the topic, this is a great point of entry to the early years of Black American history. Its focus on food and community is a balm.

I keep thinking about this series.
On one hand it’s a fairly conventional travelogue/food show. A host travels to different places, meeting local cooks and eating local food. But on the other hand, it’s different.

The host, Stephen Satterfield does travel to different cities, but he travels as someone looking to learn. When he goes to Benin in the first ep, he says something like ‘All my life I’ve tried to fit in in America. But now I’m here.’ And you see this palpable releasing of tension as he’s welcomed into people’s homes, kitchens, and shops. One of the Benin women speaks about the importance of welcoming the descendants of Africans kidnapped by slavers. It’s a joy.

So this traveling is about Satterfield discovering family and history. This discovery is a radical act, because you can never ignore the fact that every Black American person in this series is the descendant of kidnapped people. Satterfield expands this personal discovery to a larger act of remembering and commemorating Black families and history. This is a radical act in modern day America.

When Satterfield visits people’s kitchens, restaurants, and homes, he is respectful. He listens. He gives them space to speak about the food, their families, their history. He feels gentle, and respectful. Sometimes this respect is articulated (he calls older men ‘sir’ and older women ‘ma’am’).
Most of the time it’s implied: the listening. The waiting for people to tell him things. He doesn’t explain history to them, or interrupt. When he tastes their food, he takes time to savour the flavours, then he responds in a thoughtful, but positive way. By respecting their food this way, he is respecting not only their own work, but their family and history.

Most importantly, he doesn’t dictate the cooking on screen (even though he is a chef). He might assist, or be given tasks, but he is always there as a respectful guest.

A lot of time there’s silence. This silence from a host in this type of program, particularly a male host, is unusual. And it sets up a feeling of gentleness. These people, some of whom have very little, are unfailingly generous with their knowledge, their time, their food. It’s often a moment of vulnerability for them. At one point in the Freedom episode, Satterfield asks a woman chef (who is baking in her home kitchen) what it means to be baking cakes for Juneteenth. Her reply is moving. She’s holding back tears as she explains that in the kitchen she can be proud of who she is as a Black woman in a society that doesn’t value Black women. Satterfield’s response is utterly respectful. He just waits and listens, and then thanks for for sharing her space.

I think this sense of sharing and respect is the nicest part of this program. These people invite Satterfield to their tables. They often have their own family or friend at the table with them. They share family stories and recipes. The stories can be difficult to hear. But there is always a theme of strength and sophisticated technical prowess. Cooking and eating becomes a site for empowerment.
I love it.