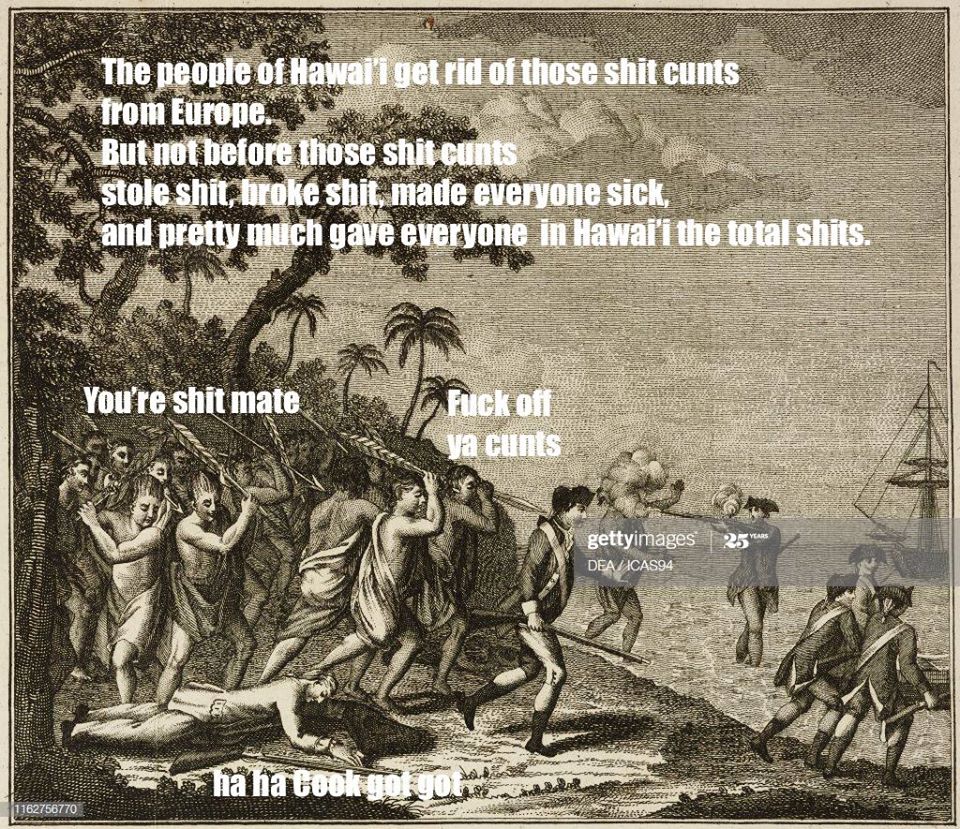 So, after Kate asked for an actual source for James Cook raping people, I’ve been doing some ‘light’ research trying to find the original twitter thread where I read about this.
This thread was between a few first nations women (Australia, Hawai’i, NZ, etc), and they dropped some sweet links.

Anyway, I can’t find the original twitter thread (😭) but I have read a lot of interesting things.

Key was that Cook and his crews knowingly carried disease (TB, syphilis, gonorrhea, and lots of other lovely things) to the people of the pacific region (NZ, Hawai’i, Australia, Tahiti, etc). They knew they were sick, but they still had sex with local people. They also stole stuff, beat people, raped people, and were generally shitty guests. Eventually the people of Hawai’i had jack of Cook and his bullshit, and killed his arse.
There are lots of primary sources (journals, stories, drawings, paintings, etc) about this. It wasn’t a secret.

– Cook was a bad person. He did three major voyages, getting progressively more violent and aggressive, and eventually getting killed on the final voyage (12 Feb 1779, Hawai’i).

– His violence was expressed through increasingly violent (and quite horrific) ‘punishments’ for indigenous people who broke his ‘rules’, and for his own crew.

– His crews were allowed to interact with various villages as they travelled, including sexual relationships.

– Cook declared Australia ‘terra nullis’. He knew that people were living here, but because he didn’t count anyone who wasn’t European as a human, he decided that no ‘people’ lived in Australia.

– The people of Hawai’i (and other places) got increasingly shitty with Cook and his crew. They’d pass through their harbours to restock water and food, and to do some R&R. At first the Hawai’ian people were ‘yeah, ok’ and because women were considered sexually and socially autonomous people, they would have a root with the visitors. For fun. And also for economic gain. Sex work (giving sex in return for things like european goods) was culturally ok at the time. But after a while Cook and his mates became less fun. And they were riddled with disease.

– Lilikalā Kameʻeleihiwa (a scholar from Hawai’i) explains that Cook and his men brought TB and STIs like syphilis to the people of Hawai’i. Who were NOT impressed by these dirty europeans. Cook also had sex with local women.

– Eventually Cook got got by the Hawai’ian people for trying to kidnap the aliʻi nui (king/god/leader) Kalaniʻōpuʻu. He and his marines laid hands on Kalaniʻōpuʻu, and tried to drag him away, in punishment for the theft of a jolly boat.
The especially bad bit of this was that Cook disrespected the aliʻi nui body and spiritual/god status of Kalaniʻōpuʻu by laying hands on him.

In sum, Cook did not consider people of colour ‘human’, and if you don’t consider someone human, you don’t believe they have bodily autonomy, and therefore cannot give consent to sex. By this logic, if they can’t give or not give consent, they can’t be raped.
This sort of logic isn’t new, and I’m not the first person to draw these connections; there’s other (better) research about this stuff. But we can see these sorts of patterns of behaviour today in sexual offenders: men who regard women, girls, and children as less human and less important than their own desires, and do not respect their bodily autonomy*.

But I haven’t yet found specific primary sources detailing Cook’s sexual assaults. Mostly because I couldn’t read any more about him without feeling sick.

Here are some sources:

– Accounts of disease in Cook’s crew, and on the population of Hawai’i before and after his visits are plentiful. You can find zillions with a google search, from his crew’s journals to oral histories from Hawai’i people and so on. It’s not a contested idea; it’s a fact.

*’bodily autonomy’ is the right to make choices about your own body, what it does, how it looks, how it works, and who gets to touch it. It’s a useful phrase and concept for talking about sex, reproduction, imprisonment, and health. It’s also a powerful phrase for talking about children and their rights.