I did notice recently that members of the group’s community had booked two women from the Shake em Up Jazz Band for the Australian Jazz Convention (an event that was first held in my own suburb of Ashfield, Sydney in 1948). But even that couldn’t convince me to go to this whitest of white man events.

I was really surprised to see this on their page today:

The logo for the 2019 Australian Jazz Convention shows a line drawing outline of seven musicians. It seems wrong that, especially when two women musicians from New Orleans were special guests, all the musos shown in the official logo are men – no women in the band. I didn’t notice on the badge – too small – but it was obvious to me on the large posters in the Albury Club on New Year’s Eve. 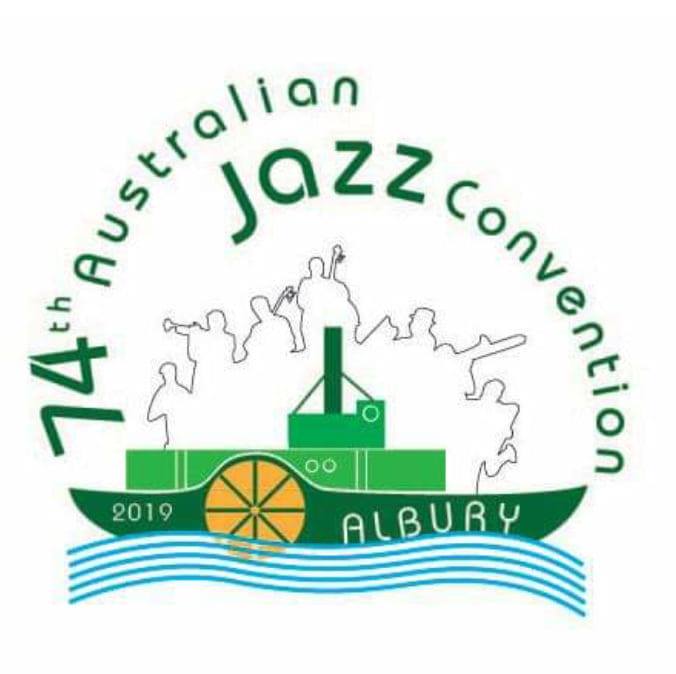 There was nothing but shitposting for this comment. And because I am bed-ridden and bored in the Swedish winter, I responded. Of course.

Ken Farmer wrote at one point in the thread:

Ken Farmer But it IS gender specific. I’m sure the artist didn’t think, ‘I’ll be gender specific: men only’, but has done this without thinking. This is culturally imbedded prejudice, stuff that happens without thought and is usually not noticed. It takes time to change, and we must all try to notice, and remark on it when we do.

And I agreed. And I pulled out this reply:

To do an old school textual analysis of why the figures in this image ‘read’ masculine:

As someone points out elsewhere in this thread, it’s a common trend for an (inexperienced) designer to use iconic photos as source material for a simplified human image. The repetition of this theme – that we can use iconic photos of humans playing instruments, all of whom are men – repeats the idea that ‘all humans who play jazz are men’. It’s not said explicitly, but it’s implied through this repetition. The point that no one has commented on this before, and that so few people are supporting Ken’s original observations suggests that the primary audience for this image accept this normalised idea of jazz = masculine.

It might not seem important to not have figures clearly identified as ‘women’ or ‘girls’ or even anyone who is not an adult man. But a logo is, literally, an abstracted image designed to represent a whole brand. In this case, the logo is intended to be a quick way to identify a flyer or picture or film or website or facebook group as ‘about the australian jazz convention’.

We can make further observations about the logo and what it means by where we see it in context.
The Australian jazz scene (particularly this part of the jazz scene) is predominantly older, white, and dominated by men. If you keep an eye on the feeds from various Australian jazz fan pages on fb, you’ll see that 99.9% of photos of musicians, comments by fans, and fb posts are by men or featuring women. There are only very occasionally pictures of women. A recent post about ‘banjo women’ was notable because it was so unusual to see women – _older_ women! – featured on the page, let alone playing instruments together in a group!

I was actually stunned to see the women from the Shake em Up Jazz Band featured in ads for the event. They are a hardcore feminist jazz band, who also have serious jazz chops. They are incredible musicians and hardcore professional arse kickers. Frankly, I was surprised to see them associated with an event like this. I last saw them in the Swedish countryside at a huge jazz dance event, where they spoke directly about dealing with sexist old white men in the jazz world.

But. These two rare images of women in jazz on this page, and associated with this event made me consider this event as something I might like to go to.

However, the responses (all of whom are by men, but three) in this thread have reinforced the event’s image as not only male dominated, but also actively sexist.

This particular comment was openly sexist and derogatory to women and girls, and the lack of condemnation for this comment by other posters further suggests that this place (this event) not only devalues women, but supports and endorses sexist and sexualised derision of women.

At a later point in the discussion, a woman noted:

I’m not sure who Shaye or Marla are/were but presenting an image of Jazz as all male certainly perpetuates the myth that only men can play it.

For your listening and viewing pleasure, these two artists are part of the Shake Em Up Jazz Band: https://www.shakeemupjazzband.com/

This band draws on some of the best and most influential modern new orleans jazz bands for its membership. All of whom are women. They are truly incredible live – see them if you can.
They are also openly feminist, and engage with issues of race and ethnicity, motherhood and professional musicianship. Their album ‘A woman’s place’ makes this very clear: https://shakeemup.bandcamp.com/album/a-womans-place

They write in the notes to that album (source):
With A Woman’s Place, New Orleans-based Shake ‘Em Up Jazz Band pays tribute to women composers and lyricists. We put this album together with the intention to celebrate these artists and their contributions to the music we love and play daily. The album title, an abbreviation of bassist Vivien Garry’s composition “A Woman’s Place is in the Groove” suggests a more inclusive history of jazz, reminding us that as progenitors of early 20th century music the legacy of women extends well beyond performing, but also includes arranging, composing and influencing this music since its earliest days.

Lovie Austin and Lil’ Hardin Armstrong were both pianists with formal music education who were integral to the Chicago jazz scene of the 1920s. Hardin played piano and arranged for both King Oliver’s Creole Jazz Band and Louis’ Hot Fives and Sevens. She contributed some of the most memorable tunes of those sessions, two of which are presented here: “Skid-Dat-De-Dat” and “My Heart,” the very first recording made by the Hot Five in 1925.
Cora “Lovie” Austin, perhaps best known for writing the Bessie Smith hit “Down Hearted Blues,” can be heard on recordings accompanying many of the great early blues singers, notably Ethel Waters, Ma Rainy, Ida Cox, and Alberta Hunter. Austin’s own recording unit, the Blues Serenaders, included various prominent Chicago jazz musicians, among them New Orleanians Johnny Dodds, Kid Ory, Jimmie Noone, and Tommy Ladnier. Represented in this album are “Charleston Mad” and “Traveling Blues,” a variation on the New Orleans warhorse “Weary Blues.”
The Boswell Sisters (Martha, Connee and “Vet”) who are well-remembered for their seamless and intricate vocal harmonies, are represented here with their original “Puttin’ it On,” which features compositional elements such as shifting tonalities, tempo changes, and contrasting sections that make Boswell Sister records so enthralling.
Lyricists are also represented on this album: Lucy Fletcher contributed the lyrics to Clarence Williams’ “Sugar Blues,” while vocalist Alberta Hunter is credited with the music and lyrics to “The Love I Have for You.” Both Lovie Austin and Lil’ Hardin accompanied Hunter in Chicago during the 1920s.

Ragtime composer May Aufderheide, who wrote “The Thriller,” “Blue Ribbon Rag” and “Buzzer Rag,” among others, is represented here with “Dusty Rag,” a tune known to many revivalists through Bunk Johnson.

“In The Gloaming” is the oldest tune on this album (1877). Meta Orred wrote the lyrics of this tune, which were originally a poem. The music was composed by Annie Fortescue Harrison.

Elizabeth Cotten is better known to folk music audiences, though her song “Freight Train” has made its way into jazz performances throughout the years, including a recording by Preservation Hall. Represented on this album, “Shake Sugaree” was written in her later years with the help of her grandchildren.

Although we know little about the life of blues singer Geeshie Wiley, her name is familiar to fans of early blues and especially among collectors of 78 RPM records. “Last Kind Words Blues” — with guitar accompaniment by Elvie Thomas — is one of only six sides she made for Paramount Records between 1930 and 1931. Adding to the allure of the original performance is the fact that only three copies of the original 78 record are known to exist.

Rather than being the impossible task of an exhaustive survey of early 20th century American female composers and lyricists, this album is much more intended to be a celebration of these songs and the women who created them, and more could be said and learned about each of these songs and artists.

We hope you enjoy listening to A Woman’s Place as much as we enjoyed making it.
– Shake ‘Em Up Jazz Band, 2018

One Reply to “Jazz fandom in Australia failing again”