Hello! Do you love travelling and lindy hopping? Seoul is the city for you.

Here’s a note: I don’t know everything about Seoul or lindy hopping in Seoul; you should double check my observations with a local.
I’m also assuming that because you’re reading this post, you can read and speak english. That’s my only language.

Where will you go?
South Korea.
South Korea has some pretty good cities, and you can lindy hop or attend lindy hop, blues, balboa, solo jazz events in most of them. But I like Seoul because it’s a fantastic city visit for other things besides dancing. I fly in to Incheon airport, the best airport in the world. It has on-site hotels, rest zones, showers, massage, endless restaurants and bars and shops, a roller skating rink, cinemas… it’s HUGE. And the train will take you directly to Seoul (it takes about 50-60 minutes, and you can buy a ticket at the airport).

Where should you stay in Seoul?
That depends on what you’re doing while you’re in the city. If you’re attending a particular event to take classes as well as party, then you’ll probably want to stay near the event venues. But if you’re planning to spend a week in the city (I recommend!), then you needn’t be tied to just one place. There are dance ‘bars’ all over the city, so it doesn’t really matter where you stay, though most visitors like to stay near a green line train station. This line of the excellent subway captures a few loops of the river and the CBD within it. You can catch it from Hongik University down to Bangbae (home to swing bars like Big Apple).

I like Hongdae. Hongdae isn’t technically a suburb or district; it’s the abbreviation of two words – Hongik Daehakgyo (Hongik University). Ask google translate for pronounciation tips. It’s an artsy/indy/studenty sort of area – lots of shops and arts centres and teeny little places to explore. And it’s well serviced by trains and buses, and it’s easy to find something to eat at any time of day. 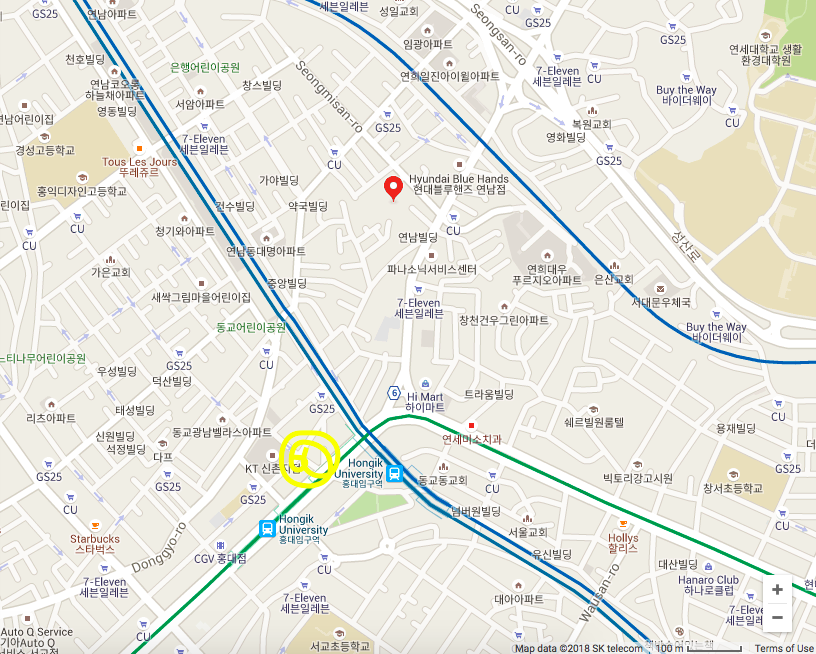 If you look at that map above, you can see there’s a yellow squigly circle on the Hongik University train station. This is an epic big station, and you should always double check the station entrance you need before you try to exit :D I like to use this station as my base for accommodation when I’m staying in this area.
There’s also a red pointer, which is centred on an address: 29 Donggyo-ro 46-gil, Yeonnam-dong, Mapo-gu. Mapo-gu is the district (which is a loose part of ‘hongdae’). Yeonnam-dong is a ‘dong’ – a neighbourhood inside the Mapo-gu district. Donggyo-ro is Donggyo Road.

If you zoom in as close as you can, you’ll see this:

Note the scale: you’re at about 20m:1cm. This should give you an idea of the density of this part of Seoul. You can’t get to it with google maps, because the road barely fits a car. But the shop looks like this: 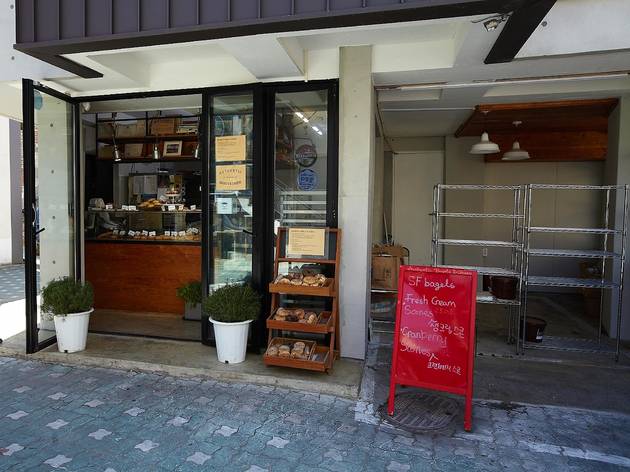 As you can see, this makes areas like Mapo-gu very walkable, and wonderful for exploring. A tiny little shop like this will often be in a three of four story building with lots of things to explore on each level.

This is how I like to spend my days.

Internet and your phone.
The internet is huge in Korea. Like, so big you will not be able to fit their kittens into your little phone. And everyone uses a big phone to talk to their friends and family, watch tv on the train, get around the city. Public use of phones is a way to politely ‘make space’ and not crowd other people, but it’s also important for finding out what’s cool in this huge, cosmopolitan city.
You can hire a wifi ‘egg’ at the airport, or most airbnb hosts provide them free of charge (check when you register).

Buy a selfie-stick and use it with abandon. It’s cool.
Take photos of everything – your meal, your drink, your friends. That’s also cool, and it’s a way to show your host that you appreciate what they’ve done. And go nuts with tags. BUT don’t take photos inside boutique shops, or in designer outlets or places where artists work and display. Especially when it comes to handmade or indy clothes. That’s not cool – that’s a bit like stealing ideas.

Use google maps and google translate.
Everyone in Seoul, even locals, use maps to find new things in tiny little dense areas. It’s totally ok to use your phone to navigate, especially if you are looking for that super chic bar/restaurant that’s just opened.

Learn some basic Korean.
Hello, goodbye, yes, no, thank you, I’m sorry, cool, delicious. A lot of people don’t speak english, so you should get some basic words. And use them! Trains, stations, and most signage use english (and chinese, japanese, and korean), and people are helpful, but you will need to use your words.

Use the underground and buses.
Cheap, clean, easy. Charge up your reuseable metcard and enjoy! BUT stay out of the train at peakhour, noob!
Note for westerners: you are bigger than most Koreans, so you will take up too much space. Make yourself small. Take off your backpack, hunch your shoulders, and keep your feet and arms close to your body. Lower your voice, and don’t make eye contact with strangers!

Seoul is a city of foodies, and there are endless places to eat and drink, from traditional Korean food to the latest in gastro-porn. Learn a little bit about Korean food before you go, so you know what to expect.
Vegetarians and vegans: learn to eat some meat :D Soz, but while there are vegetarian and vegan restaurants (esp in Buddhist families or areas), they are few and far between.
Chilli eaters, get ready for FUN. Koreans like things spicy and delicious. If something looks red, it’s spicy. And there are lots of ways to add more chilli to your food! kimchee, chilli paste, etc etc.

Easy things to eat that don’t have too much chilli: kimbap (a korean version of sushi), bibimbap (a hot stone bowl with rice, some veggies, meat, and an egg sizzling inside, accompanied by kimchee and sides), bulgogi with rice (just beef with rice). I also like BBQ, but it’s not really a meal for one person :( :(

There are also a lot of places in Seoul that specialise in western foods. As in, the best croissants you will ever eat. The best bagels.

Take Out Food
You know uber eats and deliveroo? Those things will never take off in Seoul, because Seoulites have been delivering food locally forever. Motorbikes zip around the streets, weaving in and out of crowds, and doods in helmets crowd into apartment building lifts with bags full of delicious smelling food.

Coffee.
It is the best. Iced in summer, hot in winter. Pour over, cold drip, brewed. Seoul is THE place for coffee. So don’t just settle for a chain store like Starbucks. Use a guide.

Mangoplate is a great app, but I find it’s often a bit out of date, as things change quickly in Seoul. I also use Time Out Seoul.

Where should you dance in Seoul?
That depends entirely on the day of the week, and whether there’s a big event on. Though it’s a little out of date, I still use Swing Dance In Korea (run by Adamas (KIM, Kang Seok)). This lists 15 different swing ‘bars’, and which days of the week are the ‘best’ for social dancing. Because Seoul is so high density, and there are relatively few big spaces for dancing, each of these ‘bars’ is essentially a dance studio devoted to lindy hop. Yes, there are at least 15 studios in Seoul alone where you can dance every day of the week.
These bars do look like dance studios, but they are incredibly well laid out. There are changing rooms, toilets, shoe and bag storage, heaters, air-con, great sound systems, and room for beer on tap and food. Yes, parties in Seoul include beer and snacks.

Note: not everyone who works in or runs these bars speaks English (or any language other than Korean), so you’ll need to learn some Korean words!

What night should you dance where?
Ah, that’s a tricky one. Adamas’ site does give you pretty reliable tips for which venues are ‘best’ for which nights. And by ‘best’ I mean have lots of people to dance with and a good DJ. But there are occasionally other things on – special band nights (!!!), classes with guest teachers, etc – which will change the ‘bestness’ of venues. For that you’ll need a) local contacts to ask, or b) post in the Fun Swing Dance In Korea facebook group. The latter is pretty good, but having a local contact is even better.
Yes, just as anywhere else in the world, you’ll have to make some local friends to get the most out of the local dance scene. YAY!

What is it like dancing in Seoul?
FUN.
The bars are crowded, and the music is good. Solid, swinging classic jazz. And the dancers are very, very good. There are, as per any scene, local politics and hierarchies which affect how people arrange themselves in the room, and who dances with who or asks who to dance. But as an out of towner, you can just ask anyone to dance, and they’ll probably say yes. If they say no, it’s usually because they feel very scared of dancing with someone they perceive as a ‘better’ dancer, or because they are just plain shy.

Are you a DJ who’d like to DJ in Seoul?
Ok, this isn’t something I know a huge amount about. I do DJ when I go to Seoul, but usually only at bigger events. When I’m there for regular nights, I just want to DANCE!
Because there’re so many venues, and so much competition for crowds, DJing is pretty serious in Seoul, and I’ve no doubt the usual competition, rivalry, and professional networking and manoeuvering goes on.
So if I were you, I wouldn’t just jump in and ‘ask’ for a set. Because of language barriers (if you don’t speak Korean) and Korean manners (people will try to avoid being rude or shaming you), it can be very difficult for people to say ‘no’. Your asking for a set, then pushing the point will upset local balances and really make you looke like a jerk. So don’t be a jerk and put organisers and managers in awkward situations.

3 Replies to “Going to Seoul to lindy hop”