…Skye read(s) my blog and I felt like this

only with more squeeing in my pants*.

On a completely different tack, but still here in this post because yolo, bro, yolo…I play quite a lot of Big Joe Turner and Count Basie when I’m DJing. That’s like saying “I do a lot of Frankie moves when I lindy hop”, as though there was any other way of doing it. But there’s something about Turner shouting his guts out over some stamping fucking piano. That shit gets me hot. Hot in the ‘dances like a fool til she dehydrates’ way. The only way that really means anything, right? 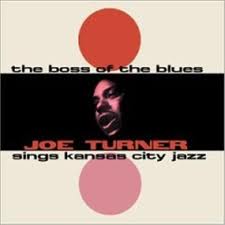 ‘Boss of the Blues’ is not a pretentious album. It’s not particularly sophisticated. It’s not rare, it’s not unusual. It’s not delicate, not by any stretch of the imagination. It’s loud, it’s shouty. Sometimes Turner shouts so loudly into the microphone the sound distorts. And while he’s shouting that loudly, the brass section is blowing their guts out and it’s just all noise. The sort of noise that gets into your guts and makes you feel extremely strong, inarticulate feelings. This is party music. Loud, shouting party music. And slow, night time party music where you’re pretty sure you’re gonna get a really good fuck by the end of it. **

This is the sort of album that beckons in rock n roll with a stamping, shouting jump blues rhythm. It’s not some shitty modern day neo band. It’s a bunch of dirty old musicians playing dirty old music in a way that lets us know that things are changing, and yet still exactly the same.

This is not the sort of album that will impress your old scratchy DJ nerd friends, or score you any snobby pants old school dancer points. But it’s an album every lindy hopper, every blues dancer, every swing DJ, every blues DJ should have.

If I’m playing a song from ‘Boss Of The Blues’ (which I do most sets), set up by a bit of new testament Basie, I like to follow up with something from the The Spoon Concerts: 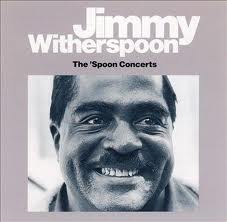 Why yes, I do like a dirty old man shouting about big legged women and money and being hard done by.

And if I still haven’t gotten it out of my system, I add something from this: 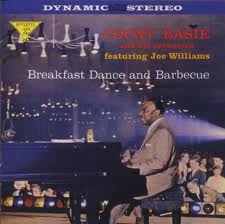 Because ‘Breakfast Dance and Barbecue’ was one of (if not the) first album I bought specifically for DJing for dancers. It’s all live, it’s all recorded late at night, everyone is trashed, but everyone is truly great.

I feel that the 1950s were a truly great era for good, solid lindy hopping music. The technology had finally gotten good, musicians weren’t being lynched in the street, bop and rock and roll were pushing jazz about in the playground, forcing it to get its shit together. People like Big Joe Turner, Jimmy Witherspoon, Count Basie pushed back.

*If there’s one thing I’ve never pretended to be, it’s cool, calm and sophisticated.
**Listen to that version of ‘Cherry Red’ and tell me you don’t agree.

One Reply to “Someone told me…”