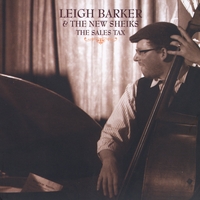 I am going to write a proper review of this CD, and was going to wait til I got back from Jumptown Jam (imma leaving in a few hours) to write it, but I couldn’t wait. I’ve listened to the first half of this album, and I know I’ll be playing the shit out of this for dancers. If you like Gordon Webster’s band (which I’ll be seeing later tonight!), you’ll like this action.

Here’s something I need to tell you: I asked Leigh for a copy of this to review. Because I’d listened to the clips on CDBaby and had a feeling. I couldn’t get to their live gigs here in Sydney with the Cope Street Parade (dancers who were there reported that the night the two bands battled was fucking GREAT), and I’m all waaaah about that. But I was prepared to write a less than glowing review, if necessary.

The New Sheiks are from Melbourne. It’s not really that surprising that Melbourne has both a flourishing jazz dance and jazz music scene. The Melbourne Lindy Exchange and Melbourne Swing Festival in 2010 and 2011 featured truly phenomenal programs of live music.
So I’ve seen Leigh Barker around the place in various bands, but I’d not heard this band til recently. Mostly because I live in Sydney, not Melbourne :D But I’ve been keeping an eye on Hetty Kate’s band the Irwell Street Band (which also features another Melbourne jazz rock star, Andy Baylor), and Barker had been impressing me there.

A stand out name (for me) in the New Sheiks is Eamon McNelis – hot shit trumpeter, who I used to go see at the Laundry with Virus nearly every Sunday afternoon from about 2002. He was about 12 then… well, maybe a bit older, but even then he was pretty impressive. These days he would be my favourite Australian jazz musician. And he sings.
But Heather Stewart has a voice that’s just a little too awesome. The fact that she plays fiddle as well sort of makes her perfect in my book. I’m pretty sure I saw her play with a Lynn Wallis/John Scurry led combo at MSF in 2010, doing filthy hokum tunes with that brilliant little band (which also featured McNelis). That was a Monday night at the end of a massive weekend of dancing, my knees had asploded and I was all ‘waaaahmbulance’. But I got up and danced my bits off. Because I couldn’t help myself.

I shouldn’t really be surprised that I like this CD, as the New Sheiks are named for The Mississippi Sheiks, who did a sort of western-edged fiddle-and-guitar swing that’s right up my alley.

Ok, so I’ve listened to the whole CD now. There are one or two at the end that wouldn’t work for dancers (really, just one), but one’s live, and they both make for great listening anyway. And, hells, dancers gotta sit and listen sometimes. ‘Sales Tax’ is a definite stand out, but there’s a lovely, pretty version of ‘Come Sunday’ which would make for really nice slow dancing. The chunky ‘Where Did You Sleep Last Night’ would absolutely be on my list for upenergy (fairly dirty) blues dancing. ‘Lonely One in this Town’ is a nice, medium-slow tempo song that would be just perfect for lindy hop. The sort of thing I’d play to allow dancers a moment to recuperate after something hard and fast, but without letting the energy in the room dissipate.
‘Alabama Bound’ is earworm fodder. I’d probably play it at about 2am, slotted in next to something chunky and high energy (maybe some Preservation Hall). It really is great fun, and has the sort of repetitive rhythm that will make you curse the moment you first heard it. Because you can’t unhear its catchy melody. I’m a fan of the Leadbelly treatment, but this Sheiks one makes me want to get up and shake it.

My favourite song, though, is Jungle Blues/Love in Vain. It has a steady walking bass line, but begins with the sort of sweet fiddle that immediately grabs the ear of someone who loves Bob Wills or the Hot Club of Cowtown. But then it changes a little midway, and the vocals shift the mood just a little. It makes me want to dance. Yes, this is my sort of music. It makes me very happy.

I know this is just my first proper listen, and you shouldn’t really review on just one listen. But if I were you, I’d buy this. And then laser the grooves out of it.

[EDIT 16-04-12: I listened to this three times in a row on the bus back to Sydney after a weekend dancing only to Gordon Webster’s band, and it still holds up. I think we can be pretty sure that this is a pretty decent album. :D ]

[EDIT 18-04-12: I used a couple of songs from this to teach lindy hop in class tonight, and then I DJed from it. It went down _very_ well. I still have to test it on a bigger, more hardcore dancing crowd, but I suspect it’ll work well.]

One Reply to “fark. squee. the new sheiks.”