Despite my better instincts, I’m going to do another post about ‘assessing quality’ in music.
I did the first one under the title Assessing quality in music for DJing part 1: the good song and that was such a long, tedious post even I can’t bear to re-read it.

With that post I’d intended to kick off a series of three addressing three points:

I can’t quite bring myself to write two more posts. So I’m going to squash it all together and write just one. I’m trying to write more concisely, mostly because it’s good craftswomanship. Also because who the fuck wants to read a long long dull post that’s poorly written?

When I first listen to new music, I assess it in a few ways. I’m usually thinking of playing this music for dancers, or I’m thinking of this as music-for-dancing. So I don’t have all these thoughts about the latest Uncle Earl album. Music for DJing – for my type of DJing – needs to do a few things:

I’ll address the last point here. Mastering and recording.
I don’t know much about this stuff, and I’m usually just going by my own ear. Which is a bit of a problem as my hearing is steadily degrading. So I’m going to talk about this issue using my own words and the way I think about the topic. I don’t have the language or knowledge to talk about it any other way. So please be warned: this could be a heap of bullshit.

Firstly, recording technology and reproduction of music media has changed steadily since the 1920s. I start with the 20s because that’s really where my interest begins. 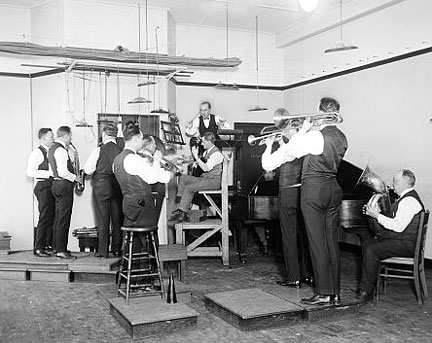 (Image stoled from here where they write “The Columbia Orchestra in Columbia’s New York studio. Date is unknown, but the conductor is not Charles Prince, probably dating this photo to some time after his departure in 1921”. Image is originally from the Library of Congress).

Here’s a fun little video about making records in 1937:

All this means that when you listen to an early recording in particular, you hear a very well rehearsed performance (if these guys were professionals). You don’t get stereo. You often hear instruments in a frustratingly flat way – trebles are often too shrill, mids are muddy. You might be listening to the product of cutting edge technology of that time, but it will not compare to today’s technology.

Many cheap CD versions of old recordings (ie from the 20s and 30s) are simply recordings of a record being played, often presented as poopy quality digital files. This means that you not only get the mess of an old recording, you also get the staticy, crackly, scratchy mess of a record and a shithouse digital file.
It’s better if a CD or digital version is taken from a master take – the original ‘master’ recording from which copies are made. It’s even better if that master has been carefully restored. Jazz nerds can crap on and on about remastering ad naaaauseum. Mosaic records have a nice example of that here.

As a DJ, I might purchase a cheaper version of a song (usually by digital download) with dodgy recording quality if I don’t have access to previewing. I might risk it on a new artist if I just want to hear what they did. But these days I tend to have a more general idea of what’s about – I don’t need to take a punt on Ellington; I know what he did. So I don’t often buy those very cheap, bottom end CDs with shitty quality digital files. In fact, I’m now regularly going back through my collection to replace shitty quality files.

So when I look for ‘sound quality’ in digital files, I want:

If I’m just listening to a song at home, I can hack poor quality recording and limited remastering (if they’ve done as much as they can). But when I DJ, I need more. Because DJing never ever happens on the perfect sound system. There are always challenges: room size and shape, sound equipment, crowd size (a large crowd absorbs sound and reduces echoes).
But each room and each sound system is different. So a song I mightn’t risk at one venue, I will play at another because it will sound fine. My very best DJing experience was at the Famous Spiegeltent, where I could play anything I wanted and it sounded great. That sound guy had mad skills – he perfectly balanced the oldest, scratchiest songs. Unlike other sound guys I’ve worked with. There’s one here in Sydney who tends to up the bass because (and I quote) “it gets them up and dancing.” I’m quite capable of getting them up dancing myself, thanks buddy. In his case I always try to do a thorough run through of all the types of songs I might play (30s small band, 30s big band, 50s hi fi big and small bands, contemporary small and big bands) just so he understands the difference, and so I can hear him balance each song.

‘Quality’ and the dancers

When I first began DJing in Melbourne in 2006 there was a marked resistance to ‘old scratchy’ songs at the main social dancing venue. The music at this event was usually a combination of neo, supergroove and shithouse modern reworkings of swing songs (crooners, mostly) by people like Michael Buble and that actor guy. It was utter rubbish. I still can’t listen to Van Morrison without feeling a bit nauseous. There were one or two (literally – one or two) DJs who played other things. But they were, for the most part, finding it a bit of an uphill battle.
So I couldn’t just come in with a set of solid, big band classic swing from the 30s and 40s. Not only was the style unfamiliar for most dancers (argh), but the quality was challenging. I solved the problem by playing a mix of musical ‘qualities’ – moving from hi fi to lo fi and back again – and a range of musical styles. I am forever indebted to bands like the Campus Five for their excellent reworkings of classic swinging jazz.

I could have just played what I wanted. But that would have alienated the dancers, shat off the event organisers and generally done terrible things for my DJing reputation, ensuring no more sets for me. Ever. So I was sneaky instead.

Today, six years later, music in Australia has really changed. Most scenes see a lot of classic swing, in fact, the ‘chic’ music is more pared-down NOLA or hot jazz combos. Every now and then I get a ‘why can’t you play some RCR/Buble/whatevs’ and I have to stifle irrational rage. Eight years of dancing to that rubbish before DJing has fostered a deep and abiding hatred for dancing to it.

But when I do a set, I still pay attention to the dancers. I find that a set of solidly lofi stuff in a mixed room can be a bit challenging. It does sound dynamically a bit flat if you’re used to modern bands and hifi recordings. So I will drop in something hifi every now and then to change things up a bit. It’s a very useful tool – a bit of hifi to shift the mood. But I still won’t play neo/crooner/rubbish.

I have also heard the argument that new dancers find it difficult to ‘find the beat’ in older lofi music. I think this is partly bullshit. Old school swing often has solid, driving rhythm that’s impossible to miss. But the band as a whole swings, and this is more challenging for dancers who’re familiar with neo or modern music which might accent the back beat or not swing at all. If a DJ only uses poor quality lofi recordings, then they are going to be difficult to dance to. But that’s the DJ’s problem, not the actual song’s.

So, in summary, once again, this is a fairly in-depth issue, one I’m not really able to address concisely as there are so many factors at play, most determined by my own personal ideas and preferences for DJing and dancing.
But I will say, clearly, that a DJ who’s playing for lindy hop should definitely and without a doubt have a thorough understanding of classic swing. Swing music from the 30s and 40s. Because that’s when this dance really got cooking. And also when the musicians were fucking HOT.

If I’m preaching, I’d say that DJs should have a solid collection of this stuff as well – they should DJ it and listen to it regularly. Keen lindy hoppers should do likewise, simply to better understand the musical structures and rhythms that developed with lindy hop. You can’t know lindy hop without knowing the music it was danced to in The Day. Modern bands are great, but they’re recreating music of a particular style and period. And you’re doing yourself a massive favour by checking out the Original And Best.
Having said that, I am eternally grateful for modern bands creating classic swing and other hot jazz styles. These guys are so useful in a set, and they’re the guys we dance to when we go to see live bands. And at the end of the day, live music is the reason for dancing.