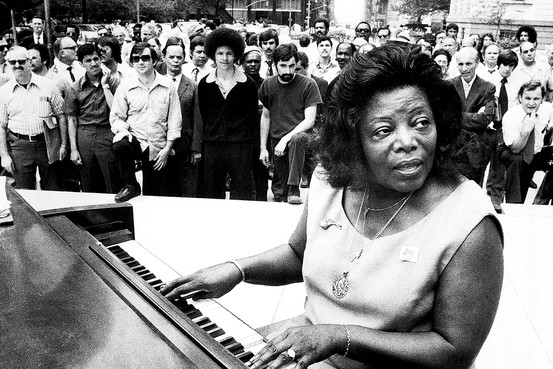 (photo of Mary Lou Williams, extremely awesome woman pianist, who fucking PWND the fairly dick-centred boogiewoogie piano world, from here. She was all about OWNING the discourse.)

I’m back running, desperate to get some serious exercise during the christmas dancing drought. So far it’s going well, except today I did run 2 of week 2 of the Ease into 10k program, rather than of the couch to 5k program. I couldn’t figure out why I was finding it so challenging. I figured it was just because I’m out of shape and it’s getting a bit hot even at 9am. It wasn’t until the last running section of the program that I figured it out. Dummy. Hope my knees pull up ok.

I love running. I’m not much good at it. I run slower than I walk. But I love running around my neighbourhood, looking at stuff and saying hello to people I see every day. Whether they like it or not. I also like it that just thirty minutes of running does the job. Delivers the adrenaline, kicks my arse, strengthens my core, lifts my mood. It’s finally getting hotter here, so I’m ready to swim again. Been in the pool once, and I’m suddenly on fire for lap swimming. Love that boring, repetitive exercise with clear, simple goals.

Right now I’m listening to a lot of boogie woogie piano, which kind of suits my adrenaline fixation. Lots of busy left-handedness.

The Sydney Festival First night stuff was fun. Thousands of people pouring into the streets of the CBD to dance and listen to music and watch stuff. The best thing I saw was a koori acrobatic troupe traveling through the festival with a team of gypsy musicians. That shit was hot. Then the next best thing was Tuba Skinny, being lovely. I didn’t much care for the Troc festival. I’m really tired of Dan Barnet’s grandstanding. I much prefer the Sirens Big Band when they’re doing their own thing, without someone with a dick bossing them about. Also, they played the lamest, lamest songs. But I did like the bit during the free class where I looked around and realised we were standing in the middle of a crowd of women dancing together. Extreme lesbian awesome. The Speakeasy after the festival was massive and hot and sweaty and I had a lot of fun there, too.

Our regular dancing gigs are about to start up. This weekend Swing pit is on Friday and Roxbury on Saturday. I’m bossing the DJs for Swingpit (do drop me a line if you want a set!), and I’m DJing at Roxbury. It sucks that they’re both on the same weekend rather than alternative weekends, but that’s one of those complicated things that really ends up being too difficult to keep sorted. I’m looking forward to DJing. I haven’t DJed a proper hardcore lindy hop set since MLX, pretty much, and the Roxbury gig is probably my favourite hardcore DJing opportunity in Sydney.

Alice and I are trying to get our venue sorted for our weekly classes, so if you know a good venue in Sydney’s inner west that’d like to righteous sisters running fun and also badarse lindy hop classes, do drop me a line. I’m looking forward to that.

Health wise, things are ok over here. Not optimal, but far better than they have been. It’s a long, slow road, yo.

Realised yesterday that most of the dance clips I’ve been watching lately are of competitions. Which is a bit boring.

Decided today that I’d really like to be a part of a community run dance event like Speakeasy, but run more regularly, and which focusses on proper lindy hopping music. I want to DJ music from 60 to 360bpm in the one set, and I want to play all my music. And I want dancers to come along and give it a go. I think I’ve finally gotten to the point in my DJing and dancing where I properly understand that just playing music within one tempo range is a complete fail, dancing and creativity wise. Not to mention historically speaking. I am now, officially, against separate ‘blues’ and ‘lindy hop’ events. They should all be in one basket. One event. …actually, I’m not sure I’m against those separate events. But I do know I’m going to continue to copy my current DJing hero, Falty, and play all the tempos in one set.

I’m also (while I’m expositing) impatient with dancers who don’t dance slow. Come on, yo, it needn’t be sexy. Though, having just watched Dirty Dancing, I generally feel that it should be dirty as often as possible. Being able to dance slow is really important in the development of your dance skills. Fast dancing hides errors. But when things are slow, you’ve got to have ninja skills. Good balance, good timing, clear understanding of musical structures. Rhythm. I am hereby advocating slow dancing. Though I’m not particularly interested in ‘blues dance events’. They are really really boring. Sure, I like a blues event attached to a lindy hop event, but a whole weekend of blues dancing? Hurrumph. Well, actually, I’m into it if the DJs and bands are ninjas. I need a very good ‘blues DJ’ to convince me to dance without the adrenaline to kick it on. And I’m not single, so I’m not into the whole frottage cheese side of blues dancing either right now. Though I’m certainly not against it. Sexeh dancing. It’s ok by me. I suspect I’d like blues dancing gigs more if I drink. But I’m boringly straight edge, so I don’t. I am an unashamed adrenaline junky, and I live for good conversation. Don’t make me take up drinking so I can deal with your conversation, k? I think, in the final analysis, that it’s easier to go to a lindy gig if you’re feeling a bit poopy or low energy, because the adrenaline kicks you out of your rut. But blues dancing doesn’t kick you, so you just carry on being a poo. Don’t go to a blues weekend if you’re feeling slumpy. Just don’t. It’s too goddamn dull.

Feminism, in the news. Or on the twitters. There’ve been a few big fights on the twitts lately. Annoyingly, the gist of it has been:

Here’s a couple of my ideas on this:

I have written part of a post on this, but it got a bit upsetting to write. I think I want to pursue it, but perhaps on another day. But I think I need to, because apparently those guys aren’t actually ok with women talking out loud in public. Especially not when those women are disagreeing with them. And me, I aim to disagree.

Why am I still running at lunch time?!
Ran today instead of swimming because I have lots of dancing planned for tomorrow night so I want the less-impactness of swimming for tomorrow.
Didn’t run very quickly today because I was a bit trashed after working so hard last night. And I got HOT and was puffing again because of allergies.
But I still LOVED it.
Without the 10mins warm up and down it’s 4.4km and a pace of 6.49.

HOT! No more running at lunch time! Got the allergies atm, so I was puffing like a steam train. And the snot – the snot! But despite the heat, the run left me feeling GREAT.
Without the warm up and warm down walks it’s 4.6km and a pace of 6.31. I’m going to stop counting the warm up walks soon.

This is the week I record all my incidental exercise.

up to the main street
distance: 2km, calories: 13, effort 1/5 feeling great
Just a little walk up for dinner.

Must. Run. Earlier. Sun is very bright.
Forgotten where I’d gotten to in the c25k so just did a week 7 run again.
I’m not getting any faster. But it is getting easier.

Slow runner is
slow.
Had a proper rest day yesterday to ease the knees. Still slow today. But that’s ok because I am _strong_.

Kicked my arse, but I didn’t stop to walk. Swapping in 2 swims instead of a Wednesday run is a good thing for my knee and hamstrings. Getting hot, though. I’m going to have to run earlier in the morning soon.

I had started doing the 3rd run, but realised half way through that my calves were not going to make it. So I changed to the slightly less intense run 1. I think the extra dancing I’ve been doing is trashing my calves. And I haven’t been as good at stretching as I should be.
But otherwise – nice run!