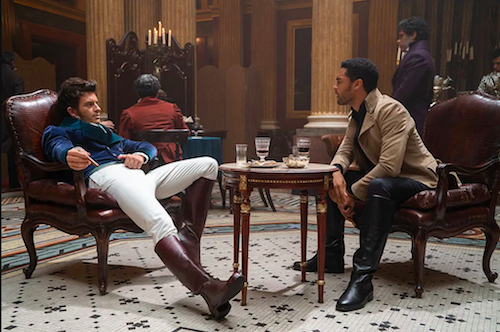 I’m rewatching Bridgerton, and this time I’m actually watching the screen.
You know, there’s a fair bit of nudity in this show. Had anyone else realised this?

Observations:
– The littlest Bridgerton boy doesn’t know his right from his left.
– Insufficient lesbians.
– The race stuff is truly truly bad. If you can have characters wearing ridiculously historically inaccurate clothes with no explanation, just make the crowd and cast multicultural with no explanations. The whole ‘the king married a Black woman, so we don’t have racism any more’ thing is painfully bad. If you think you can ignore the economic importance of slavery to 19th century England, you’re on crack.
– The race stuff is HEINOUS bad. Ok, so if you’re making your society multicultural, you’re going to need to undo your own bullshit white person racism in your character construction, plots, and society.
– It steals all its best jokes from Austen. Which is ok, as it’s clearly some sort of well-funded Austen fanfic. But still.
– We all know the withdrawal method doesn’t prevent pregnancy, right? Pre-cum, anyone?
– I’m ok with the bullshit costumes and hair, honestly. I actually like it.
– I have trouble with the whole ‘pleasuring yourself’ storyline. I’m not buying it as a line from Mr Hotpants to his mate/prospective wife. But I could almost have bought it as chat between women.
– Totally insufficient lesbian content.
– A ladder. Seriously? Ok, I guess we’ve all got our Thing. But, honestly, what self respecting servant would have left a ladder out in a big house for the family to see?
– I liked all the sideburns.
– People have really gaspy, growly sex. Not a problem, more of an observation.
– Jane Austen just looks better and better. The feminist stuff is heavy handed and awkward.
– I know it’s a modern song in the first ball scene, but fucked if I know any modern songs. It’s not a new thing; totes stolen.
– Daphne is one fucking painful bitch. So. Annoying. She simpers an awful lot.
– I have to talk about the race stuff again. Sure, you’ve got a bunch of brown faces on screen. But all your main characters are white. Except for Mr Hotpants, who seems to function primarily as the quintessential ‘buck’: oversexed, dangerous, unpredictable, troublemaker. Mr Hotpants’ arsekicker aunty does not get anywhere near enough on-screen respect from the young Bridgerton bros.
– Polly Walker is great. But she’s played this character one hundred times before, so it’s a diddle for her. Except it could have been improved by more full frontal nudity and bull’s blood.
– BridgertonWhistledownFeatherington Samantha Samanthason.