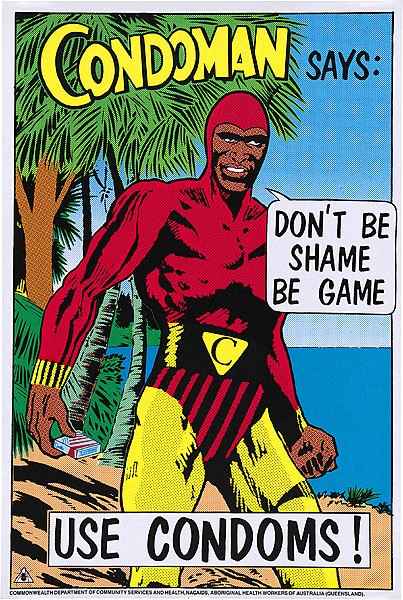 I was living in Brisbane, and about 15 when I first saw Condoman. This was mid-AIDS crisis, and the Brisbane AIDS team was based in the Valley, where my mum worked, and where we went out to see bands and get hassled by junkies.

Condoman was invented by Aunty Gracelyn Smallwood and a bunch of other good peeps from Townsville, who wanted a figure who would empower black kids and get them to use condoms. This poster was designed by and printed by Michael Callaghan and Redback Graphix in 1987.

Redback Graphix (1979-1994) was an independent printing cooperative based in Wollongong, and focussing on politically minded, community-centred posters. Their posters are most excellent.

I for one would welcome an anti-Rona poster that was a bit more empowering, and a bit more block colour than the pissweak govt publications we’re seeing.

But Redback were funded by state and federal arts grants, and the coalition governments (both state and federal) today have decided the arts can go and get fucked. So there’s no covid bailout for them (us) and funding for the arts generally has been gutted.