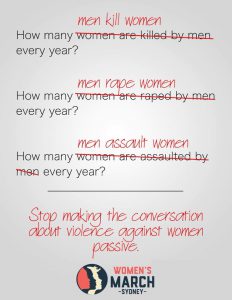 A friend asked about this:

I don’t understand, isn’t this just two ways of framing an issue, both with different purposes?

With “How many men….” I would expect to be hearing about the causes behind male violence towards women.

Language matters, but surely the first set is as important as the second?

No, it’s about using active voice and passive voice when speaking and writing about violence. This is to do with the way our culture represents women and men. Women are positioned as objects to which things happen; men are positioned as subjects who do things. This defines women’s and men’s sexuality and bodies in m/s discourse as well: women are fucked, men fuck.

So framing the question this way is the point of this particular post. It’s not asking ‘what happens to women’, but ‘what do men do, for which women are blamed?’

We often hear lines like ‘what was she wearing’ and ‘what women can do to keep themselves safe’. This language suggests that women and girls are responsible for their own assaults. Saying ‘what men can do to stop raping women’ is more powerful.

There is a shift in meaning in this image (the first version is asking for a total number of people killed, the second asking for a total number of killers), which makes these different questions with different meanings (it’s not a perfect equivalence). But I think the rhetorical device (ie the change in language) makes it ok. Rather than asking how many women are killed, perhaps we should be asking ‘how many men are killing and raping? how many men are killers and rapists?’ The issue isn’t how many rapes/murders there are, but how many rapists and murderers there are.
This is also important because mainstream culture presents the myth that murderers and rapists of women and girl are unknown strangers in public places, usually at night in the dark. When the vast majority of rapes and murders of women and girls are committed by people they know, in their own home. This then makes it clear that there are many more male rapists and murderers than mainstream myths suggest.

In fact, the point of this image is to say ‘stop blaming women for their own assaults and murders; blame the people who commit these crimes’. More specifically, it wants to emphasise the gender of the killers/rapists and the victims: women are killed by men. I like this shift because it also allows us to talk about male violence, rather than the gender of victims. After all, men rape and murder other men, boys, genderflex/genderqueer, trans, and other folk too.

Basically, this image wants to talk about male violence.