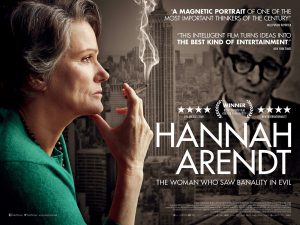 This is one of the best films I’ve seen on SBS On Demand. I barely knew anything about Hannah Arendt, so it was a very good watch.
It seems especially relevant now because it’s about a jewish woman, Hannah Arendt (Barbara Sukowa) who’d escaped a concentration camp and is now a big name philosopher/academic living in New York. She goes to the trial of a nazi (Adolf Eichmann) in Israel and writes about (spoiler) ‘the banality of evil’. Lots of people really didn’t like the way she framed her arguments.

It’s a really well made film, with great acting, etc etc. And it’s very unusual to see a film about a very intelligent, middle aged woman from a marginalised group writing and speaking cleverly on screen. It’s especially relevant now, because of its questions about how ordinary people can do great evil.

I saw the film ‘The Eichmann Show’ a few years before I saw this film, and that really helped me understand what was happening when Arendt went to the trial. I’d recommend watching that first. It’s difficult to comprehend, now, what it must have been like for survivors of the holocaust to confront a nazi in a public court. It is, of course, disturbing viewing. As it should be. But the difficulty comes from the stories people are telling, and their sheer broken misery, rather than on-screen violence.

I’m not all that familiar with Arendt’s piece, but now I think about it, this idea of the banality of evil seems to best fit the ‘robotdebt’ issue in Australia and the effect of austerity policies in the UK. The gradual dehumanising and eventual deaths of powerless people caught up in bureaucratic knots. Public servants participating in this dehumanising, just by ‘doing their jobs’.