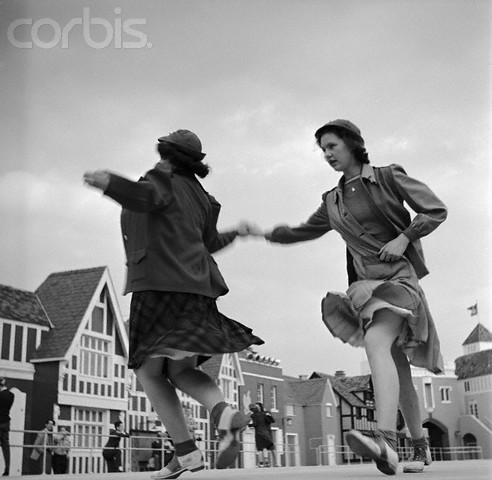 Last weekend I DJed my first proper lindy hop set since November, and it was super fine. It was the first set of the night at Imperial Swing, a social gig put on by Swing Out Sydney. TOTAL FUN. It’s a great venue, and the sound system is pretty damn special. The DJ after me – Kat – is now my new favourite DJ. She was ON FIRE. Here’s the set list, because a friend asked for it. I aim to please.

Anyways, this set is pretty much what I think of as a ‘potato chip’ set: these are the sorts of songs you can just eat down by the handful. Nothing too crazy or confronting, lots of familiar stuff (C Jam Blues!), lots of energy. I was aiming for a high-energy party feel, and wanted to keep the tempos kind of reasonable as the crowd included some very new dancers. I figured familiar was also good, as many of the regular dancers who’d arrived were feeling a bit unsure of themselves in a queer space, so I wanted to help them find their feet. And, you know, we overplay C Jam Blues because IT’S A GREAT SONG.

Here’s what I was thinking as I was DJing:

‘Blue Monday’ is a song I often start sets with. It’s an easy tempo, has lots of energy, and a very simple structure. It worked well for me here as the music in the free lesson before the dance was mostly neo, and I needed a good transition to my more old-schooly music. Also: shouting.

‘C Jam Blues’. By this point I had a lot of energy happening, and the room had settled into proper social dancing after the class. I decided I wanted to come in pretty hard with the energy (rather than easing into things), as I only had an hour. There were enough people in the room who could dance comfortably, so I figured I’d ring Pavlov’s Bell and get the kids jumping about a bit.

‘Blues In Hoss’ Flat’. I love following C Jam Blues with this. It’s the perfect Ellington-Basie one-two punch. BAM! Things were cooking at this point. A mass of people arrived in a big flow, so I needed to get really serious.

‘The Spinach Song’. Enough of that big band wall of sound! I wanted to get to some NOLA action eventually, so I needed a good transition. This song is a brilliant transition from that Kansas city blues shouter sort of vibe that ‘Blues in Hoss’s Flat’ sets up. It also echoed the Witherspoon song. But the instrumentation leans a bit more towards old school.

‘Percolatin’ Blues’. I felt as though the previous song was the crest of the first energy hill, so I needed a chillout song. Those previous songs had kind of battered people emotionally with their big, intense feelings, and I needed to give people an in to the dance floor if they’d not gotten up yet. So I dropped the tempos and the intensity so peeps could dip their toes in if they’d just arrived or finally recovered from the class and felt ready to try again. This was about twenty minutes into the set, which is the end of the first third, where I’m usually thinking we’re cresting.

Ok, enough with the molly coddling. Time to pump the energy up again. I’d said I’d play this in talk on FB, and it’s still massively popular. Personally, I’m totally over this version of ‘I Like Pie’. I’m tired of the mugging lyrics, and I’m tired of the fairly boring chorus. But each time I listen to it, I fall in love with Gordon’s piano. That shit is hot. Anyways, this was a crowd-pleaser.

But things were kind of loud and intense, and I saw quite a few tired people looking for a break after two longer songs. So I did ‘Sales Tax’. I think I made a slight misjudgement with this one. I needed to keep the energy up, but with a slightly different sound. Anyways, it wasn’t quite right. It was around this point that I realised there was some serious problem happening with the sound system. The sound was too loud at the front and not loud enough at the back. The sound guy had disappeared, so I couldn’t ask him.

‘Good Rockin’ Tonight’ – a live version. I went with more Witherspoon because I wanted to kick things up with some higher tempo shouting live fun. But I was quite distracted by the technical problem, so I’m not sure it was the perfect choice (though as the song progressed it turned out to be the perfect choice). But about 30 seconds in, a seriously loud alarm started beeping in the DJ booth. The dancers couldn’t hear it, but it was LOUD. The sound guy came running down and tried to fix things. Apparently someone had turned off all the music in the pub. On Saturday night in an inner city queer pub. Nice one. It WASN’T ME.

Anyways, I was kind of shaken by that, so I just lined up the next song I had in mind, and had to physically move myself out of the way, away from my laptop and the sound gear. So the next Witherspoon – another Witherspoon – was a random choice. I’d almost played it instead of ‘Good Rockin’ Tonight’, but didn’t. It turned out to be a really good choice, but I felt as though I’d lost control of things for a second there. Anyways, by the end of the song, the alarm was off, I was back at the laptop and it was time to get into things again.

By the end of that song, it was time to hit that crest again. The energy really chugs along in that Panama Francis band’s version of a standard, but Witherspoon adds a really interesting alternative to the Jimmy Rushing version we hear all the time. And I was feeling a bit smarty pants, referring back to that Basie song with Witherspoon again.

‘Milenberg Joys’. I much prefer this to the Pie and Cake song. It rocks. It pulled the energy (and tempos) up. I’d have gone faster again, but the crowd wasn’t quite up to it. There were still a lot of new dancers, and the dancers who’d been around for a while didn’t really have the skills to tackle the massively higher tempos. The room felt hot, though, and people were kind of going crazy. There were quite a few glazed crazy-eyes in the room, which was pleasing.

So I did the obvious thing after this with Preservation Hall. I’m kind of over this song. I think it’s overplayed, and unlike C Jam Blues, I don’t think it’s quite versatile enough to warrant the overplaying. But it provided a nice climax to the energy in the room. And, long song. is long.

‘Mr Gentle and Mr Cool’ is a lovely, lovely song that an Adelaidean DJ, Jarryd, put me onto. I’m obsessed with it. It actually reminds me of the Preservation Hall Hot 4 album in the piano, so in my mind it was a lovely match to the song before. I’m not sure peeps who don’t know that Pres Hall small group album would have caught the connection, but, who cares! Anyways, it’s a chillaxed, more complex song, but it still has some tempo on it, so it doesn’t let things die.

By this point I was done with that modern NOLA sound. I needed something older and funner. I’m a bit nuts about this Harry James song. It was recorded live at the World’s Fair in 1940. It starts really mellow and kind of sweet. But mid-way it picks up with a bang! and becomes a fucking brilliant dance song.
I’m interested in the World Fair from that year for a few reasons. Firstly, there’s footage of people dancing together at the Fair. And they’re all women. WIN!

The Fair did, of course, feature lindy hoppers from the Savoy doing performances, but apparently this was a pretty shitty gig. Reading through my copy of The Man Who Recorded the World, a book about Alan Lomax, I discovered that he’d designed the music bits of that World Fair as a series of ‘everyday’ music spaces – jook joints featuring blues music, town halls playing bluegrass, etc etc etc. He’d wanted to recreate the contexts he’d recorded music in during his ethnographic work. But the Fair organisers reneged on his plans and forced the ‘mock Savoy’ into the plan, and abandoned Lomax’s much more interesting ideas. I suspect this shift was partly to blame for the shitty time the Savoy dancers had at the Fair (I have, incidentally, written a bit about this stuff in the post a snot-addled, animated wander through san francisco).

More usefully to dancers on the night, ‘Tempo deLuxe’ is what I think of as a ‘builder’ – it starts mellow and gets crazy. A good transition from the mellower song before to the fun I wanted to do next.

‘Savoy’ is, of course, a song about the Savoy Ballroom. See what I did there? It’s also a stock standard. And a jolly good song with lots of fun in it.

I’ve been playing that version of ‘St Louis Blues’ for years and years and years. It’s truly fabulous, AND it was recorded live at the Savoy ballroom. See?

Ok, so things feel exciting in the room. I was building energy for the dancers, but also because we were about to have a performance by Pretty Strong Woman, who does weight-lifting burlesque stuff. And I like to set up the energy for performers.

After all that Savoy stuff I went with Wyonie Harris because the crowd had quite a few rock n rollers, and I wanted to at least throw them part of a bone. Not much of a bone, though. Mildred Anderson was a similar token effort. Both of these are great songs, but they lean towards jump blues, and I find them great cross-over songs when I’m playing a mixed lindy hop/rock n roll crowd. These two are a bit slower, too, so they’re more accessible.

And then I was done!

Fun times! And as I said, Kat played a cracker of a set after me. She really did brilliant work. And I danced like a fool til the rock n roll/neo DJs came on at midnight, and then I went home. After I saw Kira Hu-la-la do a brilliant motorhead type burlesque show. Oh, how I LOLed at her clever jokes. GOATS: THROWN!