This is a journal type blog entry, rather than a cleverly developed argument or discussion. Because I just can’t be fucked. 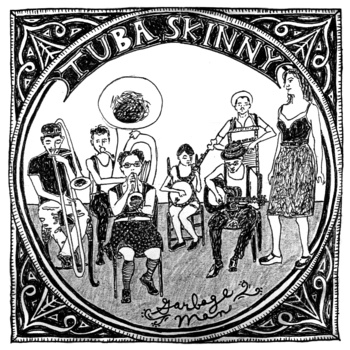 I went to see Tuba Skinny again last night and stayed up too late and it was all fun. Except I got quite tired by the end because I had had a big day and a big few days before that. That meant that I decided someone needed to lay down The Law, and I am just the person to do it. This is what I think The Law:

1. Tuba Skinny are about sixty million times better live than they are recorded. Cope Street Parade were their support act, and I think CSP need to lift their game. This was made very clear in comparing the two bands. But CSP are really just babbies, so they have some time to get it together. If they don’t, I will be withdrawing my patronage, because I’ve had enough of shouty ocker vocals.

2. I made a new shirt and wore it last night and it was a bit big around the middle. This was a bit annoying.

3. I am terrified of leading on very crowded dance floors.

4. I had a moment of real irritation when I realised that all the peeps were solo dancing in a big circle, just like people at a night club, and this was impeding my dancing.
I had another moment of irrits when I was dancing with one friend, separate like (ie not in a ‘couple dance’) and some random guy came up and sort of tried to start dancing with us. I was thinking ‘hey man, just because you see some peeps dancing, don’t mean you can necessarily just jump in and dance with those peeps.’
I think that most of these thoughts were the result of my tiredness. I mean, it’s pretty petty to resent people dancing in a big circle, or some guy (you know) trying to dance with you when he’s used to reading two people ‘solo dancing’ together as an invitation for everyone to join them.
But really, I think what I’ve learnt here is that big circles of ‘solo dancers’ are kind of floor-hogging, not to mention the fact that all of a sudden all those dancers suddenly lost all their pep and got a bit dull because they were looking at each other instead of at the BAND. I think we can all learn something from the random hippy I saw dancing last night: there are no rules, and when you feel the urge to express yourself, get out there on the floor and shake it. You don’t need a partner/six thousand buddies. Now I will endeavour to put this into action myself.

5. When you get really hot and sweaty dancing in jeans, the crotch of those jeans gets all sodden and gross and becomes a big lump of nappy round your back section. Even if they are stretchy jeans. I’m not sure I approve. I think I will dispense with the denim until the cooler weather returns.

6. Everyone needs to learn to dance slowly. It’s really beginning to bother me. I’ve watched both Dirty Dancing films now, and so I think I’m writing from a position of some authority when I say that dancing slowly can be a) cool and b) sexy. Ok everyone, let’s try dancing slowly as well as fastly and mediumly. K? K.

8. Sydney is such a beautiful city. Last night I had dinner on the roof of a pub overlooking the Sydney Opera House and it only cost me $20. It wasn’t the best food ever, but the location, the company, the view, all made it a total steal. Sydney is stunning. And the weather right now is beyond gorgeous.

Here are some general points, which aren’t actually related to last night’s gig, but which are on my mind:

3. I have a sore right shoulder from too much photoshopping.

4. Ever since that idiot Qld MP Gambaro told us migrants need to a) wear deoderent on public transport, b) learn to queue up properly and c) pay more attention to personal hygiene (you can read about it here) I’ve been laughing and laughing at how often I get on the train stinking of too much lindy hop, how I’m a migrant and how I am a complete queue jumper. She’s an idiot. And the people who think she’s right are also idiots. But I do stink and I probably should pay more attention to personal hygiene.

5. Swimming is the best.

6. I’m rubbish at the ukulele, but that doesn’t stop me trying. If only I had some sort of memory.

7. Faceplant is really difficult to use. I say this as some sort of internet nerd, and I just can’t figure it out. I suspect it’s easier if you’re between the ages of 12 and 19. I am not.

8. Last night a woman went on and on about how old she was and when I asked her old she was she told me she was “in my 30s” but didn’t say exactly where in her 30s. I said “I’m 37 and I pwn all” and then she tried to convince me that being in your 30s is being old, and that somehow there are clothes that people in their 30s shouldn’t wear. I mean, I agree with her about that – people in their 30s shouldn’t wear really tight jeans, especially when they’re lindy hopping in the middle of summer – but I don’t think that’s what she meant. Please, Ceiling Cat, preserve me from this sort of woman. With whom I have nothing in common, and cannot even begin to find common ground. And, Ceiling Cat, don’t ever let me believe that clothes have some sort of use-by date. That shit’s fucked up.