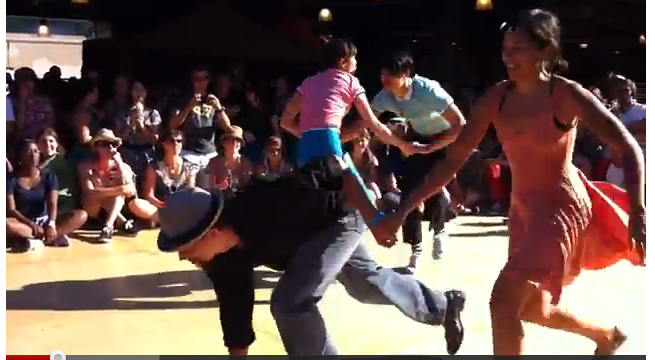 I don’t have time/brain to make this a proper story right now, but there are some interesting bits and pieces about judging dance comps floating about at the moment:

The September edition of the Yehoodi talkshow (September 18, 2011) features an interesting discussion about the 2011 ILHC competition and the “top 5 lindy hop showcases of all time”. Here, one of the key points seems to be how judges (or audiences) assess competitors’ performances in reference to their previous work. In other words, how or should you judge competitors you know are brilliant dancers but aren’t bringing their A-game in this moment? There seems to be a tension between ‘dance skills’ (eg straight up technique, fitness, understanding and use of musical structures, lines, etc etc) and ‘performance skills’ (eg a clever, crowd-pleasing choreography, mugging (or not) for the audience, etc). A general idea raised here (and elsewhere) was that dancers who put in lots of time and work on a routine were more deserving of a win than dances who just threw it together at the last minute. My thought was a lot like Manu’s, but I’ll be blunter: quit your bitching and bring your shit. If you don’t have it, practicing for weeks will bring you closer, but you’ll still get pwnd. It’s a competition; it’s not designed to be fair and equitable.

There’s an interesting post over at Wandering and Pondering about ILHC 2011: Frida & Skye Déjà Vu (31 August 2011). This raises some of the key contentions taken up elsewhere: that Skye and Frida don’t actually prepare their routines. The implication in other places is that this somehow makes them less deserving of competition wins. I say: there are different ways of preparing for a competition. If you’re as fully sick as Frida and Skye, you’ve spent your whole lives preparing, and you’re never not preparing. Your competition is an extension of your social dancing. Your ‘routine’ is a series of moves and ideas you’ve been working on for a while, but strung together to suit a song you know very well. In this scenario, you don’t micromanage everything from costumes to facial expressions. You just get your mad skillz and bring your hot shit.
[And that’s why you PWN ALL]

This of course takes us to the heart of the matter: different dancers value different things in a competition dance.

This Wandering and Pondering post Back in the Day (10 October 2011) lists a whole heap of routines Jerry loves. This gives you an idea of his ‘dance values’ and the stuff he likes to see in a competition.

That post was responding to another Bug’s Question of the Day on FB people’s favorite competition videos from 2000-2004.

There’s a longish discussion about Camp Jitterbug 2010 over and Wandering and Pondering, mostly in the comments of the Camp Jitterbug 2010 Roundup post (1 July 2010) which was picked up at Follower Variations, and led to a talk about how to talk about dance critically (as in actively engaging with a dance rather than just dissing or lurving it). I have to note here that my comment about Frida and Skye linked here was misread. I was being quite sarcastic: I thought Frida and Skye’s 2009 ILHC routine was quite amazing. The thing I liked most about it was that they went with a slower song at a time when everyone else was going CRAZY FAST. I really liked that they took a slower song and showed that they can dance orsm at any tempo. You can’t hide your fuck ups in a slow song. I think this might have led to the mixed responses to this routine at the time – peeps were digging on the faster music with the higher energy and this 1943 Roy Eldridge song ‘Jump Through The Window’ felt slower. It’s also a 40s song when most peeps were still trailing along behind Naomi and Todd and the rest of the Silver Shadows who were bringing the hot, fast action in 2005.

I think this last little chunk of linky lays out the way musical and performance tastes and trends change over time. I think 2005 was a turning point for lindy hop competition in that we saw hot, fast, early (as in late 20s, very early 30s), often small group music replace slower, bigger, later recordings. The Silver Shadows pwnd all. And ULHS set the balls-to-the-wall agenda which has really dominated lindy hop since. Not to mention stripping the weight off every competing lindy hopper in the world. But Jerry does a much more thorough job of outlining these changes in his Back in the Day post than I can.
I want to say, though, that this is a story of American lindy hop competition culture, and the Australian story is very different. Mostly, we’re lagging a few years behind the US, and we still haven’t reached the highest international standards when it comes to dance quality in competitions. Australian competition dance as a whole isn’t really representative of the Australian lindy hop dance trends and quality any way – there are plenty of very good Australian dancers who don’t compete at all. But enough! More links!

Finally, Bobby has written three posts on judging dance competitions. He is the king of clear, simple language, so he’s worth reading just for that refreshing break from too-long sentences and cluttered adjectives. :D The first post On Judging (Introduction): A Few Questions was written on the 28th September 2010, the second On Judging, Part 1: The Basic Competition Blueprint was written on the 18th January 2011, and the third On Judging, Part 2: Watching and Note-Taking Technique was written on the 10th November 2011. Again, it’s interesting to see how people develop these ideas over longer periods of time.
This post is sweet for its discussion of the nitty gritty of judging, stuff I know nothing about, because I don’t compete (though I’m happy to speculate). I think the thing we can all take away from those posts is: Sylvia Sykes, queen of ALL.

That’s about all I’ve got to say about competitions and ‘dance values’ in competitions right now, so I’m going to end with some unrelated dancespam. Sylvia Sykes, pwning all:

I was going to finish off with a brilliant clip of Sylvia and Manu competing in a jack and jill together because it clearly demonstrates dancers’ respect for Sylvia and Manu’s general awesomesauce, but the user had taken it down. Boo!

[EDIT: Doh. I forgot add some links about ILHC 2011 from Jo’s blog. I like her posts because they give you an insight into her thinking about her own competition dancing (well, that’s the first reading; it could all be a clever PR plan :D ): Highlights from ILHC,

One Reply to “Link round up: competition and lindy hop”