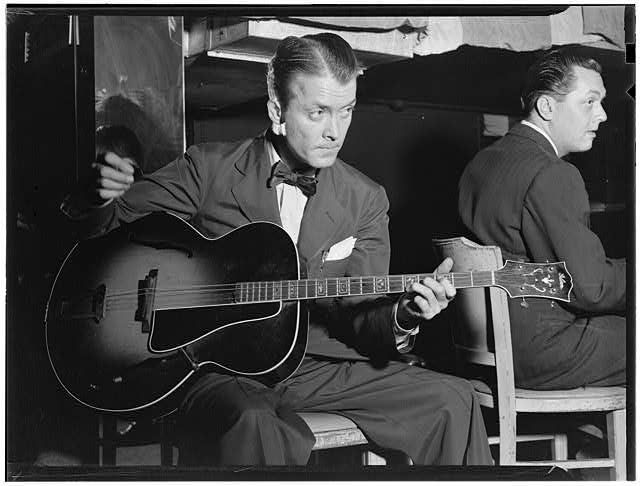 Photo by William Gottlieb in 1946 from the Library of Congress William P. Gottlieb Collection.

Eddie Condon. Chicagoan guitarist who just went on and on and on. Telly, albums, night club. The jazz brand of win. Was also in some brilliant bands. I don’t actually have a lot of his stuff (considering just how much he recorded), and I’ve found that most of the best quality recordings I have are from the cheapy JSP box set of his stuff. Which I got from emusic, and so don’t have liner notes for. How frustrating! I did manage to sort most of the discographical details out using the Tom Lord Jazz Discography, but it’d just been easier to get a good Mosaic set.

1. Bugle Call Rag. A dancers’ favourite. I like this pared back version. The cool thing about these earlier recordings is that many of these bands with different names actually featured the same musicians.

2. Same year as Bugle Call Rag, Shine On Your Shoes has much the same personnel, and the catchiest melody ever.

3. This version of Sweet Thing is interesting, as the vocals are an obvious imitation of Fats Waller’s style, and many of these Chicago boys actually recorded or played with Fats Waller. Fats Waller’s version of this song is much subtler and more beautiful. The mugging on this track is a bit much, but it’s an interesting example of Waller’s influence.

4. Billie Holiday on Condon’s show. I think it’s a radio show – it was one of those I had to try to figure out using the discography, and I could have made a mistake. But it’s an interesting example of Condon’s ability to pull stars.

5. We Called It Music. There are a heap of versions of this roll-call type ‘stunt’ song, featuring the biggest names in jazz at the time. This is really just a showcase for various big names, and isn’t the best song on earth, but it’s an interesting example of this type of performance.

6. Mahogany Hall Stomp by Louis Armstrong’s Savoy Ballroom Five, of which Condon was a part. This interracial element is super interesting, as is the Savoy connection. This is a brilliant little song.

7. Who Stole The Lock was made famous by Naomi and Todd’s brilliant 2005 performance, and I remember it really kicked Melbourne lindy hoppers’ musical interests into a new realm. It’s excellent when big name lindy hoppers do performances to music you’re into, as it means that music gets a bit of PR that then smoothes the way for your DJing it. I remember it still took a while for Melbourne to get into this song and this style. Sigh.

9. Ridin’ But Walkin’. This is an example of Fats Waller playing with these white Chicago boys. This is really quite a lovely song, and has a more ‘sophisticated’ sound than a lot of the stuff these various musicians did in smaller, rowdier groups.

10. I love the vocals to There’ll Be Some Changes Made. This is fun stuff.

11. More of Fats Waller with the white Chicago boys. This shit is hot.