Thursday is, according to the word on the twitters, #trollday. I’m not really sure what that means. At first I thought it meant that we should post troll-y things on teh twitz or on our blogs or on the faceplants. In the sense that they should be deliberately inciting furious debate.

Then I thought it meant that we should be responding to troll-y posts by other people, getting full of the righteous fury. Or shouting “troll!” and pointing at said troll. This is where we all (once a-fucking-gain) shout at Andrew Bolt. Geez, am I the only one who’s had a gutful of that fuck? Surely not.

I’m not really keen on that second approach to trollday. My most successful methods for dealing with trolls in public forums has involved:

a) Posting a streaker to derail the flamefest started by a bit of trolling. I’m not sure how well-known streaking is beyond the British empire, but there’s a long tradition of streaking at major public sporting events here in Australia. 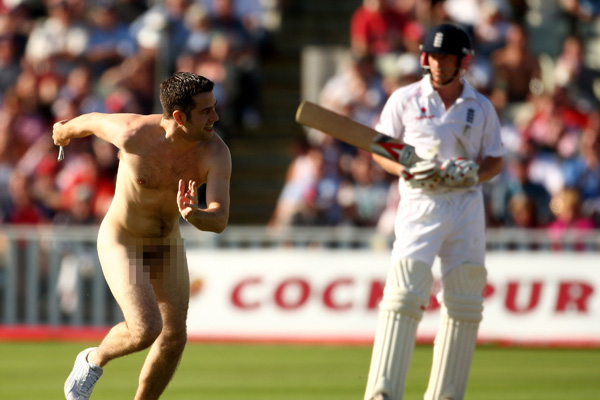 b) My other method for dealing with trolls is to ignore them. I delete comments on my blog if they’re nasty. I unfollow twitterers who repeatedly say things that upset me or give me the shits. I unfriend sexist fuckwits on faceplant. Just like I hang up on prank callers and I walk away from dickheads in conversation (though I admit – I will give a dickhead a serve in a conversation. If I’m feeling my oats.)

I’ve found this approach very useful. For a while there on the Australian swing dancing discussion board I was getting some pretty nasty hate mail/private messages/etc. The moderator(s) were utterly useless on this front. So I had to deal with it myself.

You know what I did? I deleted them, I blocked them, I ignored them. Suddenly, no more harassment (sexual, verbal, you name it). And by geez did it make them crazy with the rage! But you know what? If an idiot can’t figure out why I’m cranky with their genderfail, I’m not going to buy into their attention-seeking rubbish by helping them get their learn on by responding to their inanity. That’s their issue. And there’s a pill for that.

You know what? I’m ok with that. Because it’s not like there’s a shortage of opinions with which I disagree everywhere else in the mainstream mediasphere. Or on the streets of my city. Or in the conversations of people I meet. I quite like the thought of setting up my own little counter public sphere (thanks Nancy Fraser and all the sisters who’re down with that action). I like the thought of fostering debate and discussion which is both respectful and supportive of feminism, socialism and all the other isms I dig. Because, despite the impression Paper Giants was trying to give, Ita Buttrose and mass-circulation ‘womens’ magazines do not represent me and my ideas about women and feminism*.

After all, the best response to a bit of trolling is to ignore it.

Easier said than done. I’ve had no end of trouble trying to convince people in online arguments that women have a right to, oh I don’t know, make their own decisions. Look however they please. Wear what they like. Think their own thoughts. Express those thoughts. Be treated with respect in public discourse. And do all that action on the dance floor – bring their jazz steps (or not), say no to rough or disrespectful dance partners**, actually lead rather than follow.

This has resulted in far too many late nights until I realised that there were better solutions. Yes, the ‘ignore them’ thing works online. But in the world of bodies, the best way to convince some dickhead that women can be excellent leads, is to get my arse up on the dance floor and be the best bloody lead that I can be. The best way to convince people women can DJ is to get up and DJ. And to keep doing all these things until you get good at them. Or as good as you can be. I figure, eventually, I’ll be dancing in an echo chamber – there’ll be just as many women leading as men, all around me on the dance floor. Wouldn’t that be nice?

So, on this trollday, I suggest we embrace the echo chamber, and rather than rising to the LOLBolt bait once again, we turn our attention to the interesting, clever people amongst us who do have things we should be reading or listening to.

* Right here, I have to say: if the only way you have of defining a woman’s power/lessness is through sex, sexuality and childbirth, you’re doing it wrong. Cleo, its publisher and its content do not represent my idea of woman-positive discourse.