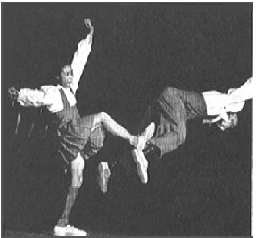 10 responses to “Fuck that shit. I’m not wearing no fucking high heeled shoes.”