NB: I’ve done some edits on this post for the shocking grammar/mistypes. Apologies.
In the 1930s and 40s – most particularly the 40s – jazz was mainstream music. It was popular. Though it had been discussed in a range of specialist magazines and periodicals (including Down Beat and Metronome) for years, the mid-40s saw mainstream publications like Life, Look and the men’s magazine Esquire publishing stories and photos about jazz and hiring writers to produce jazz reviews. I think it’s worth noting the point that Esquire was a men’s magazine, that almost all the jazz promoters and managers were men, and that almost all jazz instrumentalists were male. (Norman Granz from the Verve site)
This mainstreaming of jazz is interesting. It was also a challenge for jazz afficianados who were committed to raising the profile and status of jazz musicians as artists. Reading about Norman Granz, I’ve come across this discussion:

Beginning with the first jam sessions he organized and extending through two decades of JATP concerts, tours, and records, Granz applied three rules. The musicians he hired would be paid well; there would be no dancing at his events; and there could be no segregation on either the bandstand or in the audiences. The first of these rules responded to exploitative club owners and promoters. The second institutionalized a trend that was already familiar from other attempts to establish jazz as an art, a concert music. The third rule was most important, because it recognized the limitations of previous efforts to mix the look of jazz- efforts that had relied on an optimistic trickle-down theory of cultural-social change. Granzâ€™s third rule attempted to ensure consumption as an act of resistance to racist conventions; it tried to direct attention both to the relation of individual consumers to the producers of the music they consumed and to the relations between individual, and perhaps different consumers of the same musical product (26).

It’s interesting to see how Granz’s efforts to raise the status of jazz as art coincided with his anti-segregation and anti-racism efforts. The popular served as ‘low’ culture, and low culture is where black musicians were situated. It’s this equating of segregation with popular culture which I find really interesting. I’m also paying attention to the way jazz is ‘artified’ by various discourses.
Today jazz in Australia has been thoroughly canonised, stuffed into the ‘elite’ or ‘art’ category. It is not popular music. ‘Modern’ jazz is ‘difficult art’, ‘classic jazz’ is daggy and something for old white people. The issue of race works in a different way: there are no black artists in the jazz bands I see at Australian dances, besides the occasional female singer. This is in part because Australian multiculturalism works in a different way to American. But I also think that these efforts to ‘artify’ jazz has effectively distanced it from anyone other than white musicians and white jazznick fans.
This is just a first thought, so please don’t take it as any final argument or position. But it’s making me wonder about ethnicity and class in Australian jazz. We were, after all, segregated as well. And we did have a White Australia immigration policy. I haven’t begun any work on Australian jazz, but I’m wondering how the contemporary jazz landscape looks, in terms of race and gender?
It’s also important to note that there’s a general undercurrent in much of the critical work on jazz that I’m reading (critical in the ‘theorised’ sense rather than ‘reviewing records’ sense) that bebop was far more challenging and engaged with race politics in America than swing. There’s also some provocative stuff about masculinity and black masculinity in the literature on bebop). 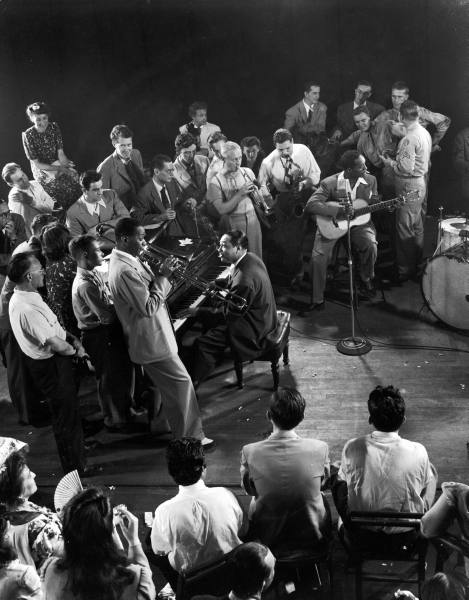 (another Gjon Mili photo from his Life magazine series)
Additionally, I’m noticing that the ‘jam session’ is acquiring mythic status throughout all the jazz literature. This is where jazz musicians (regardless of colour or class) could come together and just play, for hours or days, in ‘safe’ clubs or back rooms. The implication is of course that in jam sessions musicians were ‘free’ and in staged performances they were ‘caged’ by social convention.
My spidey sense is tingling. If these jam sessions were so free and liberal, where are the sisters? Who’s home looking after the kids or grandmothers so these uncaged tigers can jam the blues all night? You know, of course, that this brings us back to the role of gender in jazz, and in jazz journalism. And to my central research interest: the relationship between different media within a community… or in constructing community.
Knight, Arthur, â€œJamminâ€™ the Blues: or the Sight of Jazz, 1944â€. Representing Jazz, ed. Krin Gabbard. Duke U Press: Durham and London, 1995. 11-53.
An earlier post on magazines and jazz
An even earlier post on magazines, jazz and masculinity