I just want to keep a copy of this comment from faceplant, because I think it’s interesting.

I’ve been thinking about and playing some music that I think of as ‘sinister blues’. I call it that mostly because I remember seeing the Belle and Sebastian CD If you’re feeling sinister on the coffee table when I was talking about it with someone. I like the way B&S, with their kind of sulky, hip aesthetic use the term ‘sinister’, and I like the way their use contrasts with the sort of show these ‘sinister blues’ people do (which is excessive, flamboyant, over the top and everything being hip is not).

Basically, when I think ‘sinister blues’, I’m thinking about bands who use acoustic instrumentation, often borrowed from jazz, blues or folk traditions (gypsy, yiddish, tango, etc), sing songs that are often quite bloody or hypersexualised, dress up in quite flamboyant, carnivale type gear, and do live shows that are really dramatic and fun. Some of them take themselves really seriously, some (most) have a bit of a sense of humour about it.

They really do feel a bit Carnival, in that they are about excess, and often sing or perform stories which are deliberately ‘shocking’ or ‘forbidden’ or otherwise nasty. It’s the excess – of emotion, costume, performing style, etc – which makes them super fun. They tend to dovetail with the goth/rockabilly scene in Sydney, where there’s already a high-costume aesthetic. And some pretty heinous gender fail (do not let me get on my burlesque rant again). But as I point out, there’s room for queering this shit up. Just like in True Blood, which takes all that excessive drama and sinister performance and twists it just a little (I wrote about that a little bit here).

Keith Shapiro:
Meant to take notes on what we were talking about a month ago re: “despicable” blues or something like that, but didn’t write it down and twitter lost it all. Can you remind me about the bands you were talking so I can investigate for this month’s podcast? :)

Keith produces Confessin’ the Blues, which is an interesting podcast discussing music for blues dancing.

I wrote this response:
Hmmm… I think it was ‘Sinister blues’ akshully (just a name to sum up these bands’ kind of dark, broody style).
Tim Jones had some good names as well.

Ones I can think of:

The Tiger Lillies, ‘world’s foremost death oompah band’ (http://www.tigerlillies.com/; video: http://vimeo.com/10442987). Probably more in the cabaret/gothic glam camp, but still…
[edit: I have written about them here before] CW Stoneking, who you know (http://cwstoneking.com/ ; video: http://www.youtube.com/watch?v=Jgncwm9cMio reminds me of the Tiger Lillies). Definitely danceable songs on his cds, and has links with Melbourne’s hot jazz scene and bands/musicians who play regularly for lindy hoppers. Brothers Grim remind me of some bands which are popular in Sydney (where there’s a greater cross-over with rock n roll and rockabilly), including the Snow Droppers (http://www.snowdroppers.com/) who aren’t necessarily ‘blues dancing’ bands, but are in that sort of newer or retro-type rockabilly/jump blues/rhythm n blues (whatevs) vein. 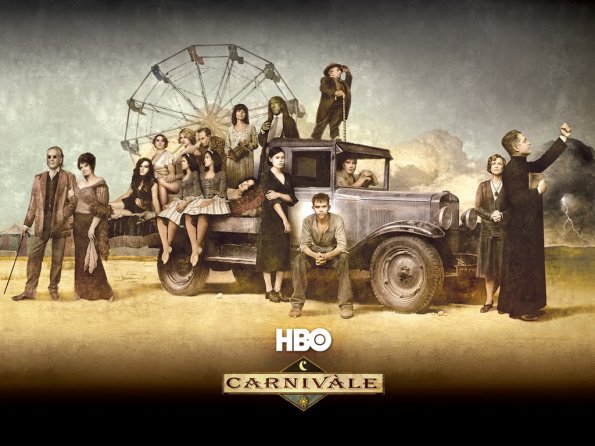 I like the term ‘sinister blues’ because it implies the nasty, morbid, goth edge. It’s also super-serious, which makes me giggle. Reminds me of True Blood, in the BEST possible way. In fact, there’s probably good stuff on the TB soundtrack, and I’ve found good stuff on the Deadwood and Carnivàle soundtracks as well.
I’m not entirely comfortable with all these bands because some of them (esp at the rockabilly end of the spectrum) tend to be GENDER FAIL. But then, all that work they do is intended to ‘shock’ (including via dodgy gender politics, violent or bloody themes, etc), which is kinda immature, but also part of their shtick. And it can be kinda fun, what with the dressing up and all, especially when it gets _so_ serious it becomes ridiculous.

I can’t think of any female groups who do this stuff (beyond Mojo Juju) And I’d _really_ like to see some queer artists getting in there and screwing with the heteronormativity and rampant blokeism (something for the http://www.redrattler.org/ I think…)
…but then, I don’t really know this music very well.

If I’m DJing these guys, I often add in some super old school stuff with dark or darkly funny lyrics (eg Rosetta Howard singing about how she’ll ‘cut him if he stands still, shoot him if he runs’; Irma Thomas doing ‘Soul of a Man’; Bessie Jones singing ‘O Death’ on the Alan Lomax recordings) – stuff that says bayou, voodoo, etc. Glen was right. After ep 3, True Blood is really neat.
It’s addictive. I think I need to negotiate the politics, but for now, I’m just loving it. I Need. To. Watch. It. All. The. Time.
Other programs I’m watching: