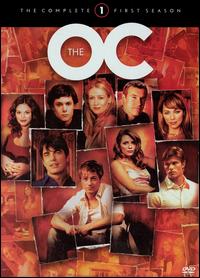 So I’ve watched the OC about 4 or maybe even 5 weeks in a row now.
I think I’m hooked.
It’s so completely ridiculous – the ‘teenagers’ speak like world-weary script writers, everyone’s either really rich or ‘living in a caravan’ and really rich. Even the ‘poorest’ characters wear clothes that are about 10 million times more expensive than mine. They all live by the sea, drive expensive cars and are ridiculously skinny.
I was a bit of a Dawson’s Creek fan, in that I wouldn’t turn it off it was on, but I wouldn’t tape it or seek it out. I was delighted in the last episode of Buffy that I watched (Out of my Mind to see Spike declare that Pacey was being an idiot because ‘she’ didn’t love him.
Poor old Pacey. I was sure he was a special needs character from the ads. But he …wasn’t?
Yeah, so I’m watching the OC. I forget about it as soon as the program finishes, though the ads kind of catch my interest.
It is so ridiculous. I have no idea what’s going on. But I have Opinions about the characters:
Marissa (the teeny sex queen one who’s on all the ads for shampoo and stuff):
Is a skinny dog who really annoys me. She needs to pin her hair back.
I’m not convinced that she’s actually an alcaholic.
Seth (the dark haired young fullah):
is obviously the one I’m supposed to dig because he likes manga and arty stuff and reading.
His minor lispy thing is meant to be hot.
I like him but he kind of annoys me. I can’t bring myself to be really impressed or to actually care.
Look, I’ve lost interest in this silly list.
Why are all the characters so young? Even the mums and dads are young, or trying desperately to look young. Yucky.
The only thing I really care about is that these kids seem to go to Buffy’s high school in Beverly Hills/Sunnydale. The same school that the film Loser was set in.