This is a fascinating photo from this book:
Gottschild, Brenda Dixon. Digging the Africanist Presence in American Performance. Connecticut and London: Greenwood Press, 1996.
This photo rocks because it emphasises the different culturally informed aesthetics of dance, in different dance traditions.
These dancers are George Balanchine (the white dood), Violetta Verdy and Arthur Mitchell. You may know Balanchine’s work from films like Cabin in the Sky]. He was a Russian-born American choreographer who revolutionised concert dance in the States (and internationally) by introducing Africanist themes to white dances like ballet (I have to note: this wouldn’t have been possible without the assistance of black dancers, and black dancers wouldn’t have been in white ballet schools if it wasn’t for the abolition of Jim Crow and other segregationist legislation).
These photos absolutely fascinate me. Check out the angles at Mitchell’s hips in the left photo – more exaggerated than Balanchine. Its off-centredness really creates some excellent angles, breaking up the ‘straight lines’ which are characteristic of white performance dance. And that from a black dood with ballet training – think of Frankie doing a Shorty George for a far more extreme example (or go way extreme and check out ‘Snake Hips’ Earl Tucker).
Joann Kealiinohomoku reads ballet as a cultural discourse in her article An Anthropologist Looks at Ballet as a Form of Ethnic Dance, noting the ways in which “all forms of dance reflect the cultural traditions within which they developed” (533). She describes “the long line of lifted, extended bodies, the total revealing of legs, of small heads and tiny feet for women, slender bodies for both sexes, and the coveted airy quality which is best shown in the lifts and carryings of the female” (545) in ballet. Check it out – you can see those long lines in Verdy’s immitation of Balanchine on the right. Note her straight line from hip to ankle, versus Balanchine’s serious angleage.
Jacqui Malone writes:

Africans brought to North American were no doubt affirming their ancestral values when they sang a slave song that urged dancers to gimme de kneebone bent. To many western and central Africans, flexed joints represented life and energy, while straightened hips, elbows, and knees epitomized rigidity and death. The bent kneebone symbolized the ability to get down

Isn’t that the most amazing shit you’ve ever seen/read?!
It just blows my mind that you can see a culture’s values and ideology in the way people hold their bodies and move. That is SO amazing! It’s also very relevent to the way we Aussie kids learn dance today – how are our culturally inscribed ways of moving and dancing affecting the way we ‘recreate’ these dances? You just have to look at the difference between someone like Ryan Francois and one of the Hot Shots to see how ethnicity affects movement – both are amazing dancers, but quite different.
And I think it is absolutely ESSENTIAL to point out that these ways of moving are learnt. No essentialist stuff here, thanks. For evidence of that argument you can check out the Malcolm X bio for descriptions of how class affected dancing in black communities in Harlem in the 30s, or you can check out the last 2 refs at the bottom. 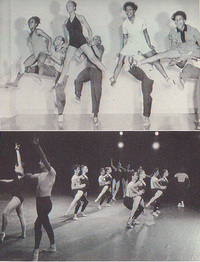 This one is just as interesting. That’s Whitey’s Lindy Hoppers rehearsing for Hellzapoppin’ (Mickey Sales/William Downs, Norma Miller/Billy Ricker, Frank Manning/Ann Johnson). Check out the individual variation on the same basic A-jump.
And below there’s a final ensemble scene from George Balanchine’s ‘The Four Temperamentals’. The ballerinas have just come down from a ‘scissor kick’ thingy and are rested on the men.
How’s that for another neat comparison?