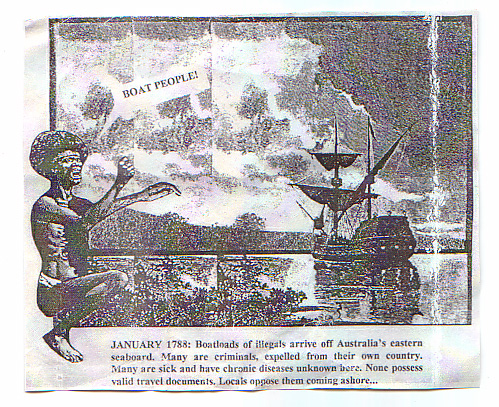 So, today is the 250th anniversary of Cook’s claiming he’d discovered Australia. He and his crew were driving the Endeavour round the world stealing stuff and killing and raping people for the British empire. They bumped into Australia, home to the oldest living culture in the world (40 000 years), 700 distinct languages, extensive complex land management traditions… basically it was bigger, fancier, and culturally rich.

Former PM Tony Abbott and his mates had planned an epic big series of expensive public thingies to commemorate Cook ‘circumnavigating’ the continent. The best bit of COVID19 is that it fucked up those plans. The best bit of history is that Abbott will be remembered for that particular nugget.

Why do we think Captain Cook was shit?
– He killed and raped a bunch of people;
– He claimed Australia was ‘terra nullis’ – there were no people living here or using the country;
– He defined ‘people’ as white people, and ‘using’ as european style intensive agriculture;
– He kicked off 250 years of invasion and attempted genocide.

He was fucken wrong.

What happened to Cook?
– He killed and raped some people in Hawai’i, tried to kidnap their leader, Kalaniʻōpuʻu, and got FUCKEN KILLED.

James Cook was a bad person, and he got pwnd.

Buy this shirt and be useful.

The above image was a bit of paper circulated at UQ when I was there in the early 90s. It was a photocopied thingy pinned up on someone’s door, so I took a photocopy of it.
I have no idea who made it, or where it came from